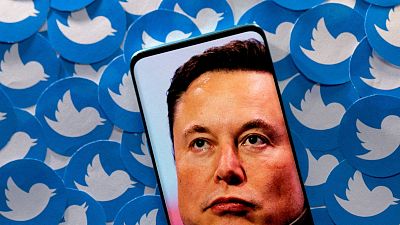 There has been a ‘surge in trolls’ and abuse levelled at activists since Elon Musk bought Twitter.   -   Copyright  REUTERS/Dado Ruvic/Illustration   -
By Lottie Limb  •  Updated: 17/11/2022

If you searched ‘climate’ on Twitter this week, the top result that greeted you was #climatescam, ahead of #climatecrisis and #climateaction.

What’s being promoted to users during pivotal climate talks isn’t necessarily due to Elon Musk’s takeover of the social media company three weeks ago.

There has, in fact, been no explicit policy change in Twitter’s approach to tackling the climate denialism and delayism that is rife on its platform. But the Climate Action Against Disinformation (CAAD) coalition is still deeply concerned about what has been spreading online during the UN summit.

Its role in tracking such harmful narratives - including that the climate agenda is somehow ‘dead’ as a result of the energy crisis - has become harder in recent days. Musk fired Twitter’s sustainability team on 4 November within a wider cull of staff, two days before the start of COP27.

Twitter was meant to be ‘the voice’ of COP27

“Twitter had introduced a special climate ‘topic’ around COP26, helping users surface reliable content, and we had real advocates within the platform’s Sustainability and Trust & Safety Teams.”

An official @TwitterEarth handle launched just before this year’s summit has not posted since 4 November, although its original tweet stated that ‘Twitter is the voice of COP27’, she explains.

Since then, there has been a spike in outright climate denial on the platform, alongside more insidious kinds of delayism, intended to delegitimise COP and make people think there is no point in trying to curb climate change. Here are some of CAAD’s key findings during the summit so far.

‘Climate hoax’ tweets spread in the days after Musk takeover

One trend quickly picked up by CAAD in the days following the buyout was the idea of censorship tests.

Musk has been very public in saying he wanted to take a libertarian approach to free speech on the platform. Since then users have been encouraged to copy and paste posts with false and incendiary statements to see if they would be taken down.

One of these bullet points stated that ‘climate change is a hoax’. It was not removed.

“There was a surge in trolls and accounts who felt emboldened by this new leadership ethos,” says King.

“That particular strain petered out in a few days, but it would seem there is a new permission structure for hate, extremism and disinformation on the platform, made more chaotic by policy changes (and then reversals) surrounding ‘blue tick’ verification”

The harassment of climate activists online has also become worse, according to CAAD’s monitoring.

Verified Twitter accounts are among those casting activists as ‘extremists’ and calling for harsher punishments - including vigilante-type violence and sexual assault.

Though this hasn’t become ‘endemic’ yet, King is alarmed about the increasingly violent nature of rhetoric and harassment, especially after physical attacks on protesters in the US.

“It wouldn’t surprise me if in the coming year we see violence against frontline groups or those pursuing nonviolent direct action, including largely youth-led movements like Just Stop Oil and Fridays for Future,” she says.

“The escalation of violence in recent years, including lethally running over protestors, shows how hostility on fringe platforms can snowball into real-world harm.

“In the wake of contentious elections in Australia, Brazil, Sweden, Italy, the US and other contexts, the ability to weaponise division is arguably more acute and may well be directed towards climate movements - not least as the topic becomes ever-more enmeshed in a ‘culture wars’ and conspiracist worldview.”

Fringe platforms like 4Chan, Gettr and Telegram appear to host the most aggressive posts, including calls for sexual assault or ‘joke’ death threats. But on Twitter, long threads from the likes of US author Michael Shellenberger are shared thousands of times, describing activists as mentally unwell or enemies of Western civilization.

“Greta Thunberg is obviously a lightning rod for this kind of abuse”, adds King. But it’s spreading to other young figureheads of the climate movement and green activism in general, she says. “Bad faith actors are attributing direct blame for ‘mass psychopathy’, food shortages and the cost-of-living crisis to activists, and in some cases even claiming movements have ‘blood on their hands’.”

“The attacks are hugely manipulative, and fast reaching a fever pitch with the scapegoating of individuals.”

So intense is the far-right obsession with Thunberg, she’s even been blamed for Russia’s invasion of Ukraine.

“The overriding narrative for the Ukraine war has been that it's a result of the green agenda somehow,” says King, “because of the West's fixation on net zero.”

The reality is that if Europe had pivoted away from fossil fuels faster, countries wouldn’t be so impacted by Russia’s war and disruption to the supply chain for oil and gas, which has fuelled the current energy crisis.

But according to the actively misleading ‘takes’ of these pundits, “the West has weakened itself economically and diplomatically by its ‘cultish obsession’ with net zero, [thereby] emboldening Putin in his imperialist foreign policy agenda” explains King.

Being encumbered by green concerns, they argue, has made society vulnerable to the repercussions.

Co-opting the language of the climate movement

CAAD has uncovered multiple tactics being used to undermine the scientific consensus that fossil fuels must be phased out and global warming limited to 1.5C to avoid climate disaster.

One of the more calculating strategies is to adopt the language of environmental campaigners, starting from similar points and leading readers to very different, often defeatist, conclusions.

‘Wokewashing’ - where polluting companies and pundits prey on people’s social awareness - has been on the rise recently too.

Russian and Chinese state media outlets are among those claiming that encouraging a green transition in the Global South is a form of ‘neo-colonialism’, according to CAAD. Framed in the language of NGOs, writers like Shellenberger say that to deny Africa fossil fuels is an abuse of human rights.

This isn’t a new tactic exactly. But it’s combined with the efforts of the African gas lobby at this COP in Sharm El Sheikh, where Africa’s energy transition is a key part of discussions.

CAAD’s intelligence unit points to the “use of trade associations and front groups to falsify broad support for what are highly unpopular policies,” and “the strategic use of spokespeople like NJ Ayuk [an oil and gas lobbyist and convicted fraudster] to launder the industry's profit aims into the mainstream at COP27.”

Laurence Tubiana and Christiana Figueres, both key architects of the Paris Agreement, are among those highlighting the dangers that false information poses to climate action.

Together with other climate and advertising leaders, they have signed an open letter to delegates at COP27, calling for a clear plan of action to tackle climate misinformation and disinformation - starting with a universal definition.

It comes alongside a new report from CAAD showing the far-reaching impacts of these falsehoods on public perception.

‘Climate scam’ appeared as the top result when searching ‘climate’ on Twitter at the start of this week until 16 November evening. It slipped to number two on the search bar this morning and, at the time of writing, has disappeared.