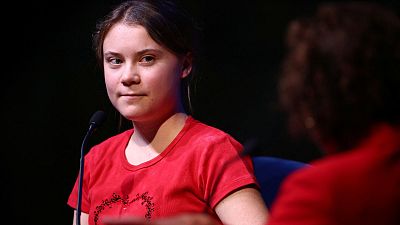 Greta announced she would be skipping the conference during a talk on her book at the Southbank Centre in London on Sunday.   -   Copyright  REUTERS/Henry Nicholls   -
By Lottie Limb  with Reuters  •  Updated: 31/10/2022

Greta Thunberg is not going to COP27.

The Swedish climate activist has, in recent years, become one of the most famous faces at the UN’s annual climate summit.

She has been to every COP since the school strikes she started aged 15 in 2018 catapulted her to the top of the youth activist climate movement.

She was at COP24 in Poland, COP25 in Spain, and last year’s COP26 in Glasgow, where she memorably slammed leaders’ pledges as so much “blah blah blah.”

Distance is no obstacle; having sworn off flying because of its climate-wrecking emissions, Thunberg sailed by zero-carbon yacht to New York for the Climate Action Summit in 2019.

But the Sharm El-Sheikh venue is a step too far - into “a tourist paradise in a country that violates many basic human rights,” she says.

Why are human rights defenders unhappy about Egypt hosting COP?

Speaking at the London Literature Festival where she was promoting her new book, the 19-year-old activist dismissed the upcoming climate summit as an opportunity for “people in power… to [use] greenwashing, lying and cheating.”

The conferences, she adds, “are not really meant to change the whole system”, but instead encourage gradual progress.

“So as it is, the COPs are not really working, unless of course we use them as an opportunity to mobilise.”

Other campaigners and social activists have been making similar points.

For The Intercept, Naomi Klein wrote that, “If last year’s summit in Glasgow was about “blah, blah, blah,” this one’s meaning, even before it starts, is distinctly more ominous.

While Klein notes that Egyptian activists did not call for the climate movement to boycott the event, she laments a lack of solidarity and spotlighting of Egypt’s human rights situation so far.

Public demonstration is effectively banned in Egypt and limits on accreditation and attendance badges for activists have been a point of contention at previous UN climate summits.

"The space for civil society is going to be extremely limited," Greta adds. "It's important to leave space for those who need to be there. It will be difficult for activists to make their voices heard."

Thunberg is among hundreds of signatories who have signed a petition by a human rights coalition calling on Egyptian authorities to open up civic space and ‘release everyone arbitrarily detained.’

What is Greta’s The Climate Book about?

During Sunday's event, Greta decried the "sustainability crisis" as a "crisis of information not getting through."

Her book includes explanatory articles from over 100 climate experts, including renowned climate scientists Katharine Hayhoe and Michael Mann, as well as authors such as Margaret Atwood.

"I wanted it to be educational, which is a bit ironic since my thing is school strikes," she said.

Asked to comment on recent protest actions by Just Stop Oil activists which saw them throw soup at Vincent van Gogh's 'Sunflowers' at London's National Gallery, Thunberg said, "People are trying to find new methods because we realise that what we have been doing up until now has not done the trick.

“It's only reasonable to expect these kinds of different actions."