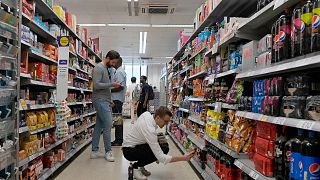 Droughts and heatwaves fuelled by climate change have endangered food supplies across Europe this summer.

Rice in northern Italy, olive oil in Spain and barley in the UK have all seen dramatic decreases in yield due to environmental conditions.

With global warming increasing the likelihood of extreme weather, many foods across the planet are set to become more scarce.

This means a lot of the basic staples people consume daily will become more expensive.

A report released by the International Panel of Experts on Sustainable Food Systems (IPES) in May described climate change as an "endemic and widespread" risk to food supplies. This is also exacerbated by rising living costs and the conflict in Ukraine.

Droughts, heatwaves, flooding and new pests are preventing producers from obtaining a reliable crop in many areas of the world.

Since pre-industrial levels, global temperatures have increased by 1.1°C. The Intergovernmental Panel on Climate Change (IPCC) has warned that if that reaches 1.5°C, around 8 per cent of the world’s farmland will become unsuitable for agriculture.

If global warming reaches 1.5°C, around 8 per cent of the world’s farmland will become unsuitable for agriculture.

Crop productivity drops in higher temperatures because of dehydration, reduction in pollination and slower photosynthesis. When hit by elevated temperatures and droughts, plant defences fail and crops become susceptible to attacks by insects and disease-inducing pathogens.

Extreme weather is also causing difficulties for livestock and fisheries. The problems are set to worsen if efforts are not made to tackle carbon emissions.

According to the UN, the combined effects of climate change, conflict and poverty could see food prices rise by an additional 8.5 per cent by 2027. It warns that millions of people are already facing acute food insecurity.

Cost of staple cereal crops soaring due to climate change

Staple foods such as wheat, rice, corn, and soybean have been decimated around the world causing prices to soar.

Rising costs of these key crops have plunged populations in Africa, Asia and South America into critical food poverty. In Somalia, for example, a 400 gram can of wheat has doubled in price since February. In India, wheat flour exports have been restricted to ease soaring local prices.

Within Europe, drought in northern Italy’s agricultural heartland has seen the production of crops like rice and corn slashed. Extreme heat and lack of rainfall have also affected tomatoes, grapes and olives.

The IPES report in May found that wheat prices hit a 14-year peak in March and corn prices reached the highest ever recorded.

Staple foods are also being affected by new pests and pathogens. In the US this year, avian flu caused an almost 300 per cent increase in the price of eggs.

But shellfish such as oysters, clams and mussels cannot escape the warming waters. In northern Italy, crustaceans are dying off in the Adriatic sea.

In the Po Delta, where the vast Po river flows into the sea, clams and mussels are particularly prized because of the unique aquatic conditions where freshwater and saltwater mix.

Now, fishermen say the shellfish are suffering because the historically low water levels of the river mean very little freshwater flowing into the delta causing it to become too salty.

Global warming increases the price of chocolate, coffee and wine

Luxury foods like coffee, chocolate and wine are also in danger. Increasing temperatures in the coffee-growing regions in Central and South America, Indonesia and Vietnam will make production more difficult.

Between 2020 and 2021, extreme heat in Brazil raised the price of coffee by 70 per cent, according to the International Monetary Fund.

As for chocolate, most cocoa grows in Ivory Coast and Ghana where droughts might soon make the area unsuitable for growing the crop.

Vineyards in California and in Europe are being plagued by extreme weather, from unseasonal frosts to droughts and wildfires. With lower fruit yields, the prices of the wine produced will be higher.

In France, mustard seed production has been hit by drought causing shortages of the condiment.

Consuming meat may soon come with a tax

Meat may begin costing more because of its impact on climate change. Livestock contributes to planet-warming emissions and forests and wildlife are destroyed to make way for land to grow animal feed.

It has led to some governments proposing a tax on beef, pork and chicken consumption. Before the war in Ukraine, agricultural ministers in Germany and the Netherlands were mulling the introduction of a meat tax.

Research published in the Review of Environmental Economics and Policy predicted a potential price increase of 35 per cent to 56 per cent for beef, 25 per cent for poultry, and 19 per cent for lamb and pork in high-income countries.

Can heat-resistant plants be developed to survive climate change?

Scientists at US and Chinese universities have been exploring ways to protect harvests in a warming world. They are studying how to help plants survive extreme heat in the hope it will protect global food supplies.

But the IPES researchers also warn that immediate action to reduce emissions needs to be taken to avoid major food price rises in the near future.

If this is neglected, the world will find itself "sleepwalking into the catastrophic and systematic food crises of the future", the experts said.

1,350 kilos of potatoes used to cook up world's largest rösti