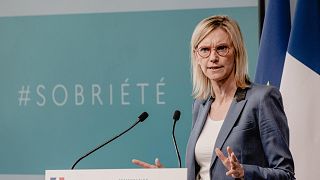 Earlier this month, France unveiled its plan for ‘sobriété enégetique’ - or energy sobriety.

The country aims to reduce energy consumption by 10 per cent by 2024 using key measures like reducing heating in offices and turning off shop lighting at night.

It follows a series of recommendations and laws from other EU member states looking to reduce their dependency on Russian gas and avoid blackouts this winter.

From switching off lights at public monuments to imposing limits on air conditioning and heating, governments across the bloc are seeking to meet mandatory targets set by the European Commission.

This EU-wide plan for power savings means a mandatory cut of 5 per cent during peak hours and a voluntary 10 per cent reduction in overall electricity demand.

France’s plan to cut energy consumption by 10 per cent over the next two years is based on voluntary measures, however, rather than legally binding legislation. By 2050, the country is hoping to have slashed its demand by 40 per cent in the name of becoming carbon neutral.

“This requires a lasting change in our habits and behaviour,” its energy ministry acknowledges.

How is the French government trying to set an example?

The phrase ‘energy sobriety’ became somewhat of a joke in French media after politicians -  most notably President Emmanuel Macron and Finance Minister Bruno Le Maire - began sporting thicker jumpers and coats. They were, in theory, trying to show the public their commitment to keeping warm while saving energy.

But it led to widespread mockery with the leader of France's far-right National Rally party Marine Le Pen comparing Le Maire to Marie Antoinette in a Twitter post that read: "Don’t have enough heating? Let them wear cashmere."

This questionable public persuasion campaign was part of a wider attempt to lead by example. The government owns almost a third of France’s buildings, which consume nearly the same amount of energy as metropolitan Paris, according to Stanislas Guerini, the Minister of Public Transformation and Service.

So, looking inwards, the country has cut hot water in public buildings and heating is limited to 19C. Public officials will have to take the train or limit their speeds on motorways to 110 km/h in order to save “20 per cent of fuel per trip”.

Working from home is also being incentivised with reimbursements for public officials choosing not to head to the office being raised from €2.50 per day to €2.88 per day.

The French public is being encouraged to adopt these “common sense measures” with Macron calling on companies in particular to follow the government’s example.

Are the images of politicians in turtlenecks and appeals to common sense working?

Households in France have been advised to keep their heating at a maximum of 19C - the same as the official cap for public buildings.

Prime Minister Élisabeth Borne said there would be “no temperature police” but people are instead being asked to consider minor changes like this in the name of saving energy.

And 47 per cent of people in the country are on board with this [particular change according to a recent climate survey from the European Investment Bank. This is around 20 percentage points higher than in Germany where just 27 per cent of people would agree to cap their heating at 19C.

A fifth of those who responded to the survey said they already cannot afford to heat their homes properly. But just 11 per cent were behind the idea of giving out energy vouchers.

Another of the solutions recommended by the government is working from home to save on travel and “optimise the use of buildings”.

Some companies are already considering this suggestion as part of their energy sobriety plans as the number of people in the office at the end of the week in France is generally lower. It led Air France to announce in September that it would be closing its head office and several other sites on Fridays.

But others were sceptical about whether it would really help to reduce energy demand as people would still be using electricity at home. The Mouvement des Entreprises de France, France’s largest employer federation, said it wasn’t clear whether the move would “achieve the desired results”.

Incentivising people to cut their energy use this winter

Aside from inspiring action at home with measures for public buildings and officials, there are also incentives for people to cut their energy use this winter in France.

A “sobriety bonus” already being offered by some energy suppliers is being extended. Households that reduce their energy consumption will receive a discount on their gas and electricity bills - though no amount has yet been disclosed.

Anyone who registers for a carpooling platform from January 2023 could receive around €100 as a bonus for reducing fuel use. And, for those looking to cut their energy bills in the long term, €9000 is being offered to switch from a gas boiler to a heat pump.

Whether these measures help France to reach its target of 10 per cent by 2024 and 40 per cent in the long term remains to be seen. And, though the country is in a better position than some others in Europe, the government has warned people to prepare for the “worst case scenario” this winter.