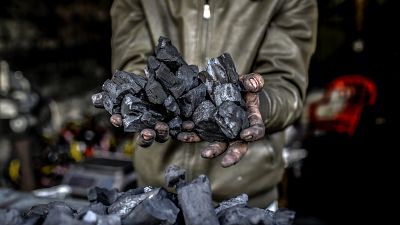 Wokewashing is an insidious tactic in which fossil fuel firms argue that strong climate policy would be politically and socially unjustifiable.   -   Copyright  MOHAMMED ABED/AFP or licensors
The opinions expressed in this article are those of the author and do not represent in any way the editorial position of Euronews.
By Jessica Kleczka  •  Updated: 27/10/2021

The fossil fuel industry has a long history of delaying climate action, almost as old as climate science itself. While outright denial of climate science, attacks on scientists and scepticism about the impacts of climate change are amongst the most well-known tactics, green groups generally place too little focus on climate delay - which is a lot more prevalent and effective nowadays.

Fossil fuel firms are well aware of this and shifted gears years ago, towards more sophisticated, policy-focused arguments aimed at slowing down the transition towards clean energy. Arguments usually centre around what action should be taken, how fast, who has responsibility and should therefore bear the cost.

Looking at our current state of affairs, they have been successful in doing so, as many climate negotiations are still in deadlock just weeks ahead of COP26. Their latest playing field is the social justice movement.‍

Wokewashing is an insidious tactic in which fossil fuel firms argue that strong climate policy would be politically and socially unjustifiable. The social justice argument is currently one of the most prevalent themes in fossil fuel discourse, claiming that a transition away from fossil fuels would adversely affect poor and marginalised communities. It completely disregards the fact that many marginalised communities are disproportionately affected by environmental racism and pollution perpetrated by those industries.

Black, brown, Indigenous and poor communities worldwide are on the frontlines of the public health emergency caused by extraction, processing, transport and combustion of oil, gas and coal.

Black, brown, Indigenous and poor communities worldwide are on the frontlines of the public health emergency caused by extraction, processing, transport and combustion of oil, gas and coal.

They tend to live nearer these pollution sources, and have lower quality air and water available than their white, wealthier counterparts. ‍

Big oil and communities of colour

In the UK, the average black person is exposed to levels of harmful air pollutants 28 per cent higher than the average urban white person.

The tragic reality of fossil fuel racism in the UK eventually surfaced into public consciousness after a court ruling that Ella Kissi-Debrah, a 9-year-old black girl from South-East London, died from “excessive air pollution” - the first of its kind, but probably not the last. It certainly does not help that the government still claims that institutional racism in the UK does not exist.

Often, big oil and gas companies will also claim to have aligned interests with marginalised communities and shamelessly exploit their employees from marginalised backgrounds to drive the myth that we rely on fossil fuels for energy security and societal progress.

Often, this narrative will drift into white saviourism, such as this Ad featuring India’s first female truck driver - whose career would not have been possible without Shell, naturally:

‍It is worth remembering that fossil fuel firms are predominantly run by white men, and that their sole objective is profit (despite trying very hard to look like a charity).

‍It is worth remembering that fossil fuel firms are predominantly run by white men, and that their sole objective is profit.

It is important to remember that Shell has been complicit in the execution of activists in Nigeria, and that Chevron tried to co-opt the killing of George Floyd by urging journalists to push the angle that “environmentalists are backing policies which would hurt minority communities”. A horrible abuse of the collective trauma black people went through during the time, and just one of many examples of the industry’s “divide and rule” strategy.

The profitability of anti-racism, however, is not enough for fossil fuel firms.

Feminism is now also all the rage, such as this ad by Chevron on female empowerment:

Let’s quickly debunk Chevron’s newfound feminism. While they stress diversity and inclusion - even comparing themselves to the UN - and feature a large number of POC and women on their social media, their fancy tagline “human energy” does not change the fact that a mere combined 38 per cent of senior positions were female or from ethnic minorities. Recent analysis suggests that the UK oil industry may even reach CO2 neutrality before gender parity.

On a global scale, women and ethnic minorities represented a combines 46 per cent of the industry’s workforce in 2019 - noting that over 80 per cent of the world population are non-white, and about half are women.

These numbers are in stark contrast to Shell’s “closing the gender gap”:

Using emotive language, representation and the trauma of sexism many women experience in their lives is a psychologically powerful, and profoundly unethical way of selling a product. Humans have an innate craving to be seen and understood - and fossil fuel giants are abusing the fact to stall the climate action marginalised groups so desperately need.

Women are one of the groups most vulnerable to climate change, and with its ads Shell perpetuates violent notions of ownership and control over the female body.

Using emotive language is a psychologically powerful, and profoundly unethical way of selling a product.

There is now a considerable body of research to suggest that fossil fuel interest groups use the social justice argument to stop clean energy legislation in the US, and the tactic is also often seen in centre-right governments in Europe (which are not typically very focused on social justice) to justify business as usual. Arguments usually revolve around big oil supporting jobs which would otherwise not exist, and our reliance on fossil fuels for societal progress.‍

While no one will primarily associate Shell and friends as social justice warriors, these tactics have seeped into the public consciousness and marred the public’s judgment, which now associates these industries with positive framings, beautifully emotive scenes, people they can identify with.

cThe fossil fuel’s industry’s co-opting of the social justice movement is deeply unethical, but it looks like its parasitic PR department is here to stay.

Other discourses of delay

Wokewashing, however, is not the only dirty trick up big oil’s sleeve. These are the other three tactics commonly deployed to slow down climate action, based on the research by William Lamb and colleagues:‍

‍We got it all wrong and the fossil fuel industry is actually completely innocent. It is our fault that we keep this terrible industry alive! This tactic includes individualism, such as BP’s “know your carbon footprint” campaign. Fun fact: BP invented this term to, you guessed it, escape responsibility.

'Know your carbon footprint'. Fun fact: BP invented this term to, you guessed it, escape responsibility.

The other side of the coin is Whataboutism - we’re only responsible for 1 per cent of global emissions, after all, so what about China? As it turns out, China’s historical emissions are still far behind the UK’s historical carbon debt as the birthplace of the industrial revolution.‍

Disruptive change is not necessary if you want to get all that sweet oil out of the ground and watch the world burn. On the stage we have technological optimism (starring zero-carbon flying and direct air capture of carbon), “all talk little action” (ambitious targets but inadequate policy, as seen in the UK government), “no sticks just carrots” (voluntary measures instead of restrictions), and fossil-fuel solutionism.

This strategy is based on the unwavering belief that the market will fix it, if we just give it a little push. For big oil and gas, the solution looks like putting wind turbines on an oil drilling station.

Unless you’re still recovering from Jem Bendell’s “Deep Adaptation”, doomism has gone out of fashion. Resignation is both ignorant (according to the IPCC, we can still turn things around for the better) and incompatible with the very essence of human nature. It challenges the fundamental notion of climate mitigation, and instead creates fear and policy failure. While adaptation is just as important as reducing emissions, it is mostly rich countries in the global north who have the privilege to rely on it, rather than containing the worst impacts.

The International Energy Agency - the leading global energy body - has warned that in order to stay below 1.5°C of global warming, there can be no new fossil fuel developments. Still, the UK government’s new Net Zero Strategy allows for new oil and gas exploration, subject to so-called “climate compatibility checks”. It is clear that they, too, have been swayed by the industry’s discourses of delay. We need to put pressure on our leaders to adopt policies similar to that in Amsterdam, which is set to become the first city in the world to ban advertising from the fossil fuel and aviation industries on its metro.

A European citizen’s initiative of over 20 groups is currently campaigning for the EU to do the same. And hopefully, many more of these campaigns will emerge - until we finally stop seeing the fossil fuel industry as part of the solution.‍

First published on stopcambo.org.uk. For more of Jessica’s work, visit her website.