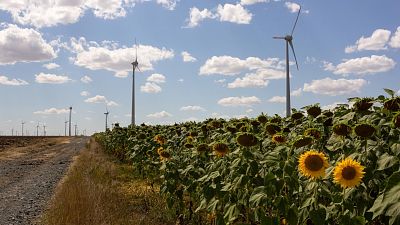 Most people in the European Union say they are now feeling the effects of climate change in their daily lives.

This is just one of the findings from the European Investment Bank’s (EIB’s) 2022-23 Climate Survey which this week revealed people’s thoughts on our rapidly changing world.

After a summer of extreme weather, an energy crisis sparked by the war in Ukraine and the rising cost of living, it shows that people the world over are becoming acutely aware of the impact of climate change.

Last year, the survey saw concerns about COVID come out on top as the number one challenge facing the EU.

This year, the cost of living and widespread economic issues dominate European people’s concerns with environmental concerns also placing high on the list.

Overall, 80 per cent of people in the 27 member states said they now feel the effects of climate change on their daily lives.

Rising oil and gas prices are just one consequence of the war in Ukraine but they are being felt worldwide. In the EU, 66 per cent of people felt that this pressure should accelerate the green transition. Croatia, Italy, Hungary, Cyprus and Portugal were among the countries where the highest percentage of people held this opinion.

“The results of the EIB 2022 Climate Survey show that, for people around the world, the crisis is also an opportunity to accelerate the transition of our economies towards a low-carbon and climate-resilient future,” says EIB Vice-President Ambroise Fayolle.

A vast majority of EU respondents (84 per cent) also believe that if we don’t drastically reduce our consumption of energy and goods in the next few years we are heading for global catastrophe.

Do people in the EU trust governments to act on climate change?

Perhaps one of the most striking statistics from the survey is that 87 per cent of people in the EU believe their government has been too slow to react when it comes to averting climate change.

The percentage of people who agreed with this statement was over 90 per cent in Croatia, Italy, Malta, Portugal, Slovenia and Spain.

Just a small minority of EU citizens (36 per cent) think that their government will succeed in substantially reducing their carbon emissions by 2030.

What solutions for the energy and environmental crises were most popular with people across the EU?

Overall, most people in the EU wanted their country to invest in renewable energy. Their reasoning for why was split, however, with 36 per cent saying that giving up fossil fuels was best for the future of the planet and 32 per cent wanting more energy independence.

France had the highest percentage of people willing to reduce the temperature of their homes to 19° C which is the official recommendation. A fifth of people in the country also said they couldn’t currently afford to heat their homes properly.

Solutions like capping the price of oil, gas and coal or giving out energy vouchers were significantly less popular.

Ahead of COP27, Fayolle says this shows, “French citizens believe that accelerating renewable energy and energy efficiency measures should be the priority in fighting the global energy and climate crisis.”

In Germany, taxing highly polluting goods and services like cars and air transport was a priority. More than 60 per cent of people said they would support a move like this. But Germans were divided on whether the country’s government should focus on diversifying energy supplies or developing more renewable energy.

One popular policy was introducing lower speed limits on motorways which was favoured by 65 per cent of people - 4 percentage points higher than the European average. Some countries including Bulgaria, Croatia, Romania, Spain and Slovenia showed even higher support for lowering speed limits.

Climate activists glue themselves to works by Spanish master Goya