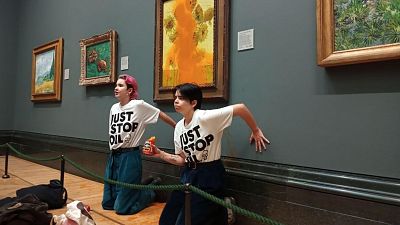 Over the last month, protest group Just Stop Oil has made headlines across Europe with mixed responses to their actions.

In October alone, these actions have included everything from throwing soup over Van Gogh’s Sunflowers at the National Gallery in London to climbing to the top of a bridge on the M25 motorway

They’ve also defaced luxury car and watch showrooms, the headquarters of a climate sceptic think tank as well as blocking roads and bridges.

What has been the response to Just Stop Oil’s actions?

Some support the activists' bold actions to draw attention to the climate crisis. Others believe they are going about it the wrong way, discouraging people from backing their cause due to their methods.

But activists from Just Stop Oil say these non-violent actions are necessary to get their demands across.

The civil resistance group is calling for the UK government to end all future licensing for the development and production of fossil fuels.

“A lot of people are saying that we’re alienating members of the public but actually the head of BP says he has more cash than he knows what to do with during a cost of living crisis,” spokesperson Alex De Koning told Euronews Culture last week.

What does Just Stop Oil want?

“People can’t afford to heat up a tin of soup. The government are seeking to accelerate fossil fuel production, which will kill millions of people, and are failing to address the worst cost of living crisis this country has ever seen.”

People were more outraged by them pouring soup on a Van Gogh painting, Koning said, than the 33 million people displaced by floods in Pakistan. He added that they will only keep doing what they are doing until the government makes a meaningful statement about ending new fossil fuel assets in the UK.

“So much of the response around this has just been out of fear, and hyper focusing on little details of what we are doing to avoid actually talking about the bigger issue.”

Watch the video above to see more of Just Stop Oil’s October actions.