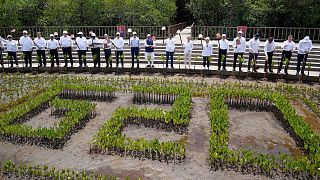 The G20 has reaffirmed pledges to limit global warming to 1.5 degrees Celsius and meet loss and damage payments, sending a positive signal for negotiations at COP27.

The 1.5 degree target - decided at the 2015 UN Climate Conference in Paris - was solidified at COP26in Glasgow last year.

But campaigners have feared rollbacks at this year’s UN climate summit, as some countries resist the inclusion of the target in the conference’s final agreement.

Today’s statement by the group of leading nations - including the US, China, Saudi Arabia, the UK, and Germany - acknowledged the effects of global warming would be “much lower at a temperature increase of 1.5C compared with 2C.”

"Mindful of our leadership role, we reaffirm our steadfast commitments, in pursuit of the objective of UNFCCC (United Nations Framework Convention on Climate Change) to tackle climate change by strengthening the full and effective implementation of the Paris Agreement and its temperature goal," a declaration issued at the end of the meeting said.

"We resolve to pursue efforts to limit the temperature increase to 1.5°C. This will require meaningful and effective actions and commitment by all countries."

The G20 represents around 75 per cent of global annual emissions. The group’s statement of intent could offer a potential boost to the COP27 climate talks in Sharm El Sheikh, Egypt, which are deep in their second week.

What will the G20 declaration mean for COP27 and loss and damage?

US Special Climate Envoy John Kerry said on Saturday that a few countries had resisted mentioning the 1.5C goal in the official text of the COP27 summit

The G20 declaration could help change that. The group urged delegates at COP27 to "urgently scale up" efforts at the summit on the issue of mitigating and adapting to climate change.

It also made reference to the need to accelerate "efforts towards the phasedown of unabated coal power, in line with national circumstances and recognising the need for support towards just transitions."

India, the world's second-biggest buyer of coal, wants countries to agree to phase down all fossil fuels rather than just a narrower deal to phase down coal that was agreed at COP26 last year.

The G20 statement seemed to somewhat support this initiative, reaffirming an international goal to phase out "inefficient fossil fuel subsidies.”

The communique also urged developed nations to meet their commitments to provide $100 billion a year for developing countries struggling with the effects of climate change.

The G20 leaders also urged COP27 negotiators to “make progress on loss and damage”. Loss and damage refers to the financial support for developing countries struggling to cope with the impact of climate change.

Under current agreements, the world is on track for a temperature rise of between 2.4C and 2.6C by 2100.

When it comes to abating the worst consequences of climate change, every fraction of a degree matters.

At 1.5 degrees Celsius warming, about 14 per cent of Earth's population will be exposed to severe heatwaves at least once every five years, while at 2 degrees warming that number jumps to 37 per cent.