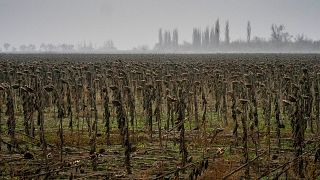 Ukrainians at COP27 celebrated the liberation of Kherson by placing a single watermelon on a chair outside their pavilion on Saturday.

Kherson is the capital of watermelons. This is why a soldier joyfully filmed himself brandishing one as he helped reclaim the southern city on Friday, eight months after Russian troops began their brutal occupation.

The fruit was a potent symbol inside the Sharm El Sheikh venue, fronting what is already a highly charged space. The Ukrainian pavilion itself is shaped like a missile crater.

“Everyone was in a very uplifted, good mood,” says Daryna Kulaha, a negotiator in Ukraine’s delegation.

The 28-year-old from Dnipro - the country’s fourth largest city - has family in Kherson who have been unable to move for months. The men, especially, fear for their lives.

The Ukrainian envoys arrived as a smaller team than last year and faced a much longer journey to Egypt as there are no flights from Ukraine. Almost none of the men in the delegation could get here given the general ban on men under 60 years old leaving the country.

Fortunately, their most experienced male negotiator is 61.

But though they’ve shown up to play their part in the UN climate negotiations, there’s no doubt that the war remains Ukraine’s focus.

The country’s environmental ministry is counting war-related emissions, Daryna explains. From the burning of forests to the explosions of oil refineries and artillery - Ukraine is holding Russia responsible for it all.

Living in Kyiv, the war derailed Daryna’s job decarbonising the state gas company Naftogaz, as it did for many working in the environmental sector nationwide.

Climate policies are not much needed when your life is under threat.

“For several months, it was totally unclear what to do, because climate policies are not much needed when your life is under threat. Then at some point, we started to reconsider and take a different angle.”

A significant part of this effort is Ukraine’s ambition to join the EU, she explains. Since Ukraine became a candidate for EU membership in June, the country is even keener to harmonise its laws and regulations with the European Green Deal.

It was her expertise on this that led Daryna to attend COP26 under Olha Stefanishyna, deputy prime minister for European integration.

Then there’s the issue of energy security that is gripping the whole continent. In Ukraine, its effect is uniquely forceful.

Russia’s invasion of Ukraine has pushed it to “fundamentally reshape its past dependence on energy imports from Russia,” the International Energy Agency (IEA) reports, and boost the development of renewables like biogas, for example.

What are relations like between Ukraine and Russia at COP27?

Though the war has dominated international news since February, Ukrainians date it to 2014 when Russia annexed Crimea and fuelled conflict in Ukraine’s eastern regions.

The recent invasion has erupted into the climate sphere with Ukraine counting war-related emissions. But Russia had already politicised the climate by claiming emissions in Crimea as part of its national total.

Every year countries have to submit statistical data on their greenhouse gas emissions to the UNFCCC. Russia includes Crimea in its submission.

I think it’s one of the only cases where a country wants to claim extra emissions.

“I think it’s one of the only cases where a country wants to claim extra emissions,” Daryna says.

“We are constantly following that issue and trying to block it because that's the way that they slowly and darkly legitimise this illegal occupation of the territory.”

The world saw what the delegation is contending with at the Bonn Climate Change conference in June, which laid the groundwork for COP27. There, during the opening session - where countries take turns to deliver their statements - the Russians began with a call to leave politics out of the discussions and focus on the climate.

“There would have been some little reason in that,” concedes Daryna, but the delegates didn’t stop there. Familiar statements about how Russia needed to “de-natizfy” and “demilitarise” Ukraine followed.

“95 per cent of other countries stood up when they started these crazy political statements - which were unimaginable, how can it even come to your mind to voice this at COP?” asks Daryna.

The Ukrainian delegation didn’t hear any of it in person, however - they left the room as soon as Russia got the microphone.

In Sharm El Sheikh, the two national delegations are “generally avoiding each other”, she says.

At COP26, parties were urged to submit new or updated nationally determined contributions (NDCs) towards cutting emissions. Ukraine is not expected to do so, but it would be hard to estimate in any case.

Around half of the country’s industry is down, Daryna estimates. Mariupol, for example, where many steel producing plants are based, has been almost totally destroyed by Russian forces under whose control it remains.

“We need the year to be over to see how it has affected industry,” she says, “but we will have a huge drop for sure. It’s going to resemble the 1990s in a way that is not a result of good climate governance and policies.”

It’s an enforced and devastating form of decarbonisation, but Ukraine is still looking to the future. It plans to rebuild a greener, low carbon economy after the war.

“It’s hard to comprehend how large the damage is,” the finance negotiator says.

“We were still developing many environmental policies before the war, so it was not perfect, but we were on a track.”

Now, there have been huge hits to water resources, the seas and forests are mined, and blows to industrial infrastructure have resulted in pollutants leaking out.

“We need Russia to pay for this after the war is over. I'm not sure if there is a precedent for environmental reparations, but we’ll definitely need to restore a lot.”

At the start of COP, President Zelenskyy called for the creation of a global platform to assess the impact of war on the climate and environment.

On Monday Ruslan Strilets, the country’s Minister of Environmental Protection and Nature Resources told reporters at the UN climate conference that there had been 2,239 cases of environmental damage recorded. At least 20 per cent of protected areas are under threat and €37.8 billion in damages have been done by Russia.

"Russia has turned our natural reserves into a military base. Russia is doing everything to shorten our and your horizons. Because of the war, we will have to do even more to overcome the climate crisis," he said.

Strilets added that the war has directly led to at least 33 million tonnes of greenhouse gas emissions and a further 49 million tonnes could be emitted by rebuilding Ukraine.