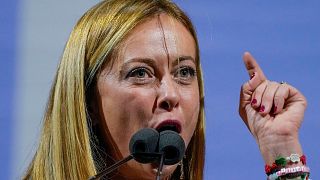 Italy held its latest general elections on Sunday, which saw Giorgia Meloni and her right-wing bloc obtain a landslide.

Meloni’s meteoric rise from a former small-time youth minister and leader of a party that once struggled to scrape 5 per cent has stunned political analysts around the world. The 45-year-old Rome-born politician will serve as Italy’s first female prime minister, and will usher in the country’s first far-right government since the Second World War.

Among many questions surrounding the policies and proposals of the incoming PM, one is particularly salient: how will Meloni handle the climate crisis?

As Italy, and Europe at large, has just battled its harshest summer in living memory, the right-wing leader will be taking the reins at a particularly crucial time for the country’s future.

What is Giorgia Meloni’s stance on the environment?

Her party takes a deeply traditionalist stance on social issues ranging from same-sex marriage to abortion, and aligns itself closely to other far-right and right-wing parties in the West, from Spain’s Vox to the US Republicans.

Since conservative forces around the world have often tended towards climate-sceptic positions, many will be worried about where Meloni’s environmental views lie.

It is worth noting from the outset that Brothers of Italy does acknowledge the existence of the climate crisis, and aims to enact and update a national plan on adapting to climate change.

Last year, Giorgia Meloni, who is head of the European Conservative and Reformists bloc at the EU level, stated that “the conservation of our natural heritage is a fundamental element of the political identity of us conservatives.”

From a party descended from a tradition that frequently flirts with - or even fully embraces - climate scepticism, things could sound worse. But there is still serious cause for concern.

Where does Meloni stand on CO2 emissions, nuclear, and climate justice?

For starters, the Brothers of Italy manifesto is lacking specific targets and policy objectives. In contrast to plans from the centre-leftist Democratic Party, for example, Meloni’s manifesto does not explicitly commit to or mention specific emission reduction targets by 2030.

Likewise, it does not lay out legal and administrative plans to better tackle the climate crisis.

Alongside her other coalition colleagues, Meloni supports a move towards nuclear energy, a controversial proposal that is generally unpopular among environmentalists, despite having recently been counted as “green energy” by the European Commission.

Meloni’s party is in a coalition with three other forces, which will also be part of the government she is forming. One of these is the Northern League (Lega Nord), a populist, anti-immigration force headed by Matteo Salvini.

The League wants to reform the EU Fit for 55 Deal - which aims to cut greenhouse gas emissions by at least 55 per cent by 2030 - and has often taken a rather defiant attitude towards Brussels and EU policies.

Meloni’s coalition received the lowest score out of all political forces running in this election in a ‘Climate Effort Index’ ranking by the Italian Climate Network.

The right-wing bloc scored particularly poorly on ‘Equity and Inequality’, which the study defines as “just transition [and] the need to monitor and address problems of wealth distribution resulting from climate policies.”

How is climate change affecting Italy?

As a southern European country with a predominantly rugged terrain and varied range of climates, Italy is particularly susceptible to the effects of global warming.

The country’s coastline and southern regions have a largely Mediterranean climate, with long, dry summers, and wet, mild winters. Here, forest fires pose the greatest risk, as well as landslides and coastal erosion.

In the north, Italy’s fertile Po Valley flatlands - the nation’s industrial heartland and economic engine - are characterised by a humid, more continental weather pattern, with chilly winters and muggy, rainy summers. The high possibility of both droughts and floods in this region can significantly jeopardise agricultural production.

The rest of the country, ranging from the Alps in the north to the skeleton-like Apennine mountain range that spans the entire peninsula, has a mostly cool climate, which often sees snow in winter. Avalanches and landslides are common, and frequently endanger lives.

Given such a complex geographical situation, it comes as no surprise that Italy - in particular its south - has been ranked by ESPON EU in 2021 as one of Europe’s most climate hazard-exposed regions.

An International Energy Agency (IEA) report stated that Italy’s average annual temperature has been increasing more rapidly than the global average over the past two decades.

“Countries like Italy are in the Mediterranean area, which itself is particularly vulnerable and hard-hit by climate change,” Davide Panzeri, a senior policy advisor and European leader of Italy’s non-profit climate think tank ECCO, tells Euronews.

“If climate action is delayed or not sufficiently incisive, we’ll see an increase in the risk of droughts, risks to human life and life on land and sea, a less hospitable climate, greater difficulty in growing crops - which are particularly important for Italy - as well as a risk of damage to infrastructure, and flash floods,” he adds.

Throughout the summer of 2022 - the hottest ever recorded in Europe - stifling daytime temperatures regularly surpassed 40°C and prolonged dry spells wreaked havoc on the environment, triggering devastating wildfires and affecting crop production.

In towns such as Pisa and Verona, water was eventually rationed to adapt to the drought. The arid summer was followed abruptly by a period of dramatic thunderstorms and rainfall. In the coastal region of Marche, 12 were killed in flash floods earlier this month.

Such patterns of extreme weather swings will become increasingly commonplace if climate change is not tackled, and Italy does not find ways to adapt to the growing challenge.

Global heating will not only have environmental impacts. It will also impinge upon a variety of other issues, and generally provoke increasing instability in the country.

Italy’s geographical position as a peninsula jutting deep into the Mediterranean Sea exposes it to migrant flows from North Africa, which are bound to increase if climate change renders life along the equator increasingly unliveable.

The heightened influx of Middle Eastern and African refugees in the mid-2010s already provoked significant sociopolitical disruption, and led to a considerable rightward shift among the electorate.

As a country with an already fragile political system and often lacklustre economic performance, Italy could struggle under the weight of mounting difficulties that climate change will pose.

Depending on how much average temperatures rise in the coming decades, the CMCC Foundation estimates that the cost on Italy’s GDP could be up to 8 per cent come 2100, with the country’s agricultural and tourist industries particularly hard-hit.

‘There’s a lot of uncertainty’: climate activists on a Meloni-led government

So how do climate analysts like Panzeri feel about Meloni taking office?

“On issues of climate there is a high level of uncertainty,” he says. “We can judge [Meloni’s] programme and it is generally light, without much ambition.”

Part of the big question for Panzeri will be how Meloni decides to arrange her cabinet, and who will become minister of the environment.

Italians are acutely aware of the unfolding environmental crisis - the European Investment Bank’s Climate Survey found that 92 per cent felt climate change had an impact on their everyday life, the second highest figure in Europe.

As Meloni enters office, all eyes will be on how she will handle mounting environmental problems, and Italians will consequently judge her for what she does - or doesn’t do - to address the situation.

Panzeri has refrained from casting his judgement on the newly-elected candidate, and does not believe it is possible to predict how successful she will be. Nevertheless, he underlined the severity of the situation.

“I believe there is hope,” he concludes. “But if urgent action is not taken, if targets are not met, the repercussions will be severe.”