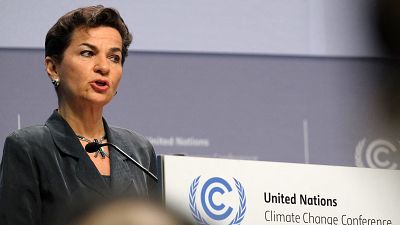 “The planet has been around for four and a half billion years. She was perfectly happy before we ever got here, and she will be perfectly happy if we’re idiots enough to pull the ejector seat and leave.”

Christiana Figueres has, on multiple occasions, been referred to as 'the woman who saved the planet'. Remarks like these come from her role in the monumental success of the 2015 Paris Agreement.

The planet has been around for four and a half billion years. She was perfectly happy before we ever got here, and she will be perfectly happy if we’re idiots enough to pull the ejector seat and leave.

But after speaking with Figueres, it’s evident that this isn’t an entirely accurate description. As she makes abundantly clear both in her book and our conversations, fighting the climate crisis isn’t about rescuing Earth at all - it’s about saving humanity.

“A very, very short time period - 12,000 years - has allowed for the human species to flourish, and build the ‘civilisation’ that we have now.

“If there’s anything that we want to rescue from that, then we have to be able to get back to a stable environment.”

As an environmental journalist who has frequently used phrases like ‘save the planet’ in headlines and articles, I ask Figueres if there’s a perception problem when it comes to the climate crisis. Should we, the media and environmentalists more broadly, instead be reframing the task as ‘saving mankind’?

She explains that it’s not a matter of ‘reframing’ anything. It is an objective fact that, if we continue on our current trajectory, humanity will suffer while the planet will continue to exist.

But, she concedes, this isn’t how most people think about the climate crisis.

“I think closing that perception gap, about the consequences of climate change, is very helpful.”

Taking the UN from failure in Copenhagen to success in Paris

After 15 years representing Costa Rica as the country’s climate change negotiator, Figueres was made the UN climate secretary in July 2010. Her appointment came in the wake of the failed UN Copenhagen Summit (COP15), where talks had fallen apart without any meaningful commitments from the countries involved.

Figueres spent the next few years reestablishing negotiations, eventually paving the way for COP21 in December 2015. It was there that the Paris Accord was adopted by 196 parties, bringing every nation together in a binding agreement to combat climate change.

“[It] was not an agreement by consensus,” explains Figueres, “[it] was an agreement by unanimous decision, which has never happened before in the UN. It was the one agreement that was unanimous, and they all decided that they would go to net-zero by 2050.”

A criticism sometimes levied against the Paris Agreement by activists is its supposed ‘lack of ambition’. The core of the agreement is a goal to keep global warming below 2°C, preferably 1.5°C, in line with pre-industrial levels.

During COP21 itself, Nicaragua made moves to object to its adoption because they felt it was insufficient (although this never came to fruition). I ask Figueres if she feels any ambition was sacrificed in order to reach the unanimous decision.

“No, actually. I think the Paris Agreement is still out there on the horizon as being incredibly ambitious because it [does] three things.

It can sometimes be easy to forget how quickly climate science has developed too. But Figueres explains that in 2015, the importance of the 2°C and 1.5°C wasn’t fully known.

“We didn’t know that when we were finishing the Paris Agreement. We thought the 1.5°C was there for political reasons - but thank heavens it’s there, because there is a scientific imperative behind the 1.5°C that we were not aware of.”

When the agreement was made, Figueres explains, science hadn’t evolved far enough to back this target. But since then the level of detail in the IPCC’s reports has improved, outlining the consequences if we don’t meet it.

“We have really understood the huge difference that we would live under if we go above 1.5°C.”

The upcoming COP26 is the next major diplomatic milestone in meeting the Paris goals and - as August’s IPCC report clearly laid out - we’re a long way off target. Figueres hasn’t been UN climate secretary since her second term ended in 2016, but she’s still a prominent figure in the movement with high expectations for Glasgow.

“If anything, COVID-19 should actually be helping to make them more ambitious,” Figueres says of the Nationally Determined Contributions (NDCs) all Paris Agreement parties are required to submit ahead of COP26.

But having worked in diplomacy for many years, she also understands better than most the challenges facing negotiators next month.

“I struggle within myself on working on climate change, because I sit on two chairs,” Figueres explains.

“I sit on the chair of impatience, because the science is abundantly clear, compellingly clear about the urgency that we’re facing.

Figueres is hopeful though. In fact ‘stubborn optimism’ is at the heart of her philosophy - and it’s an infectious mindset.

Her outlook is completely and utterly grounded in reality- there’s no glossing over the truth of what’s happening around us. Figueres isn’t interested in painting a rosy picture of the climate chaos we’re all facing. Instead, her optimism is borne out of this brutal sense of realism.

This doesn’t mean Figueres approaches everything gleefully. Our conversation takes place just after we visited Greenland’s ever-shrinking ice cap. While there, our group witnessed some of the only rainfall ever recorded on the ice sheet - a direct consequence of global warming.

“I was up at the ice cap and I had to move away from everyone else and deal with my grief and my own anger,” Figueres says. “Anger at my own generation...it’s [my] generation that has caused this.

But she points to technical advancements - like the development of electric SUVs for Extreme E - as evidence that humankind has what it takes to deal with the situation at hand.

Our inability and our stubbornness of not engaging in climate action in a timely fashion is what has us here today.

Shortly after finishing our interview, Figueres reappeared. She wanted to address the pessimism she detected from another reporter. A motoring journalist had asked a few questions about whether our species’ patterns of behaviour are incompatible with the change we need.

In an emotional moment, Figueres explained how much she can relate to that feeling of cynicism and hopelessness - emotions we all need to honour. Because, she says, there’s a bus coming towards our children, and we have no choice but to throw ourselves in front of it.

As an environmental journalist, I feel that same cynicism and pessimism too sometimes. But speaking with Figueres, I have a renewed sense of hope, of stubborn optimism perhaps.

As she says, “We basically have two options.

“Either we can sit back and say ‘okay, well...you know we’re too late.’ Or we can say ‘oh my gosh, we’re totally running out of time and we have to stand up!’

“And in my book, we don’t have any other option.”

What does extreme motor racing have to do with Greenland's ice caps?