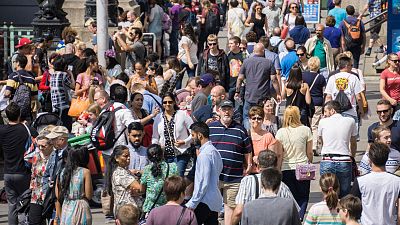 On Tuesday, the world’s 8 billionth person was born.

That’s according to a projection by the United Nations, which has designated 15 November 2022 as the Day of 8 Billion to mark this milestone.

At the same time, the world is getting hotter. The Earth has warmed almost 0.9 degrees Celsius since we hit the 4 billion-person mark in 1974.

Climate change and population crowding might seem like two issues that are strongly linked - and they are, but not quite as much as people might think, experts say.

While more people consuming energy - mostly from the burning of fossil fuels - is warming the planet, the key issue isn’t the number of people. It is how a small fraction of those people are causing far more than their share of carbon emissions, say several climate and population experts.

“But I think most importantly, we have an overconsumption issue.”

Because of that, the 8 billionth child born will “not have what we had ... because there’s not enough resources,” she says.

Although climate change can often be linked to population growth, it doesn’t necessarily follow that one is caused by the other.

And regions that have more people do not necessarily emit more carbon.

The question is not about population but rather about consumption patterns

Take Kenya, which is currently suffering a devastating drought. It has 55 million people, about 95 times more than the population of Wyoming in the United States. But Wyoming emits 3.7 times the amount of carbon dioxide as Kenya.

Africa as a whole has 16.7 per cent of the world’s population but historically emits only 3 per cent of global carbon pollution. The United States, however, has 4.5 per cent of the planet’s people but since 1959 has put out 21.5 per cent of heat-trapping carbon dioxide, according to data from the Global Carbon Project.

Looking at emissions from countries between1959 and 2020 the United States, not China, is the biggest carbon polluter.

“The question is not about population but rather about consumption patterns," said climate scientist Bill Hare of Climate Analytics.

"So it’s best to look at the major northern emitters to begin with.”

How does the world’s population affect climate change?

Climate Interactive, a group of scientists who run intricate computer simulations that can be tweaked to see what factors matter the most in fighting climate change, looked at the difference population makes.

It found that number of people made a small contribution as opposed to other factors, like economics.

Hare says there is more than a tinge of racism in the myth that overpopulation is the major issue behind climate change.

“One of the biggest arguments that I hear, almost exclusively from men in high-income countries, is that, ‘Oh, it’s just a population problem,'” The Nature Conservancy Chief Scientist Katharine Hayhoe said.

“Nothing could be further from the truth.”

“The 50 per cent poorest people in the world are historically responsible for 7 per cent of heat trapping gas emissions,” Hayhoe said.

“Yet when you look at which countries are bearing the brunt of the impacts from climate change, countries like Malawi, Mozambique, Senegal, Afghanistan, topped the list.”

And even within countries, it’s the wealthiest who cause more of the carbon pollution, Hare adds.

“[Overall] 80 per cent of the population, the global population, emits a small fraction of emissions.”

Which areas of the world are growing the fastest?

The world’s population is growing mostly in sub-Saharan Africa and south Asia “and they’re contributing the least to man-made climate change,” said Colette Rose, project coordinator at the Berlin Institute for Population and Development.

Eight nations, five in Africa and three in Asia, are going to have at least half of the population growth between now and 2050, according to Rose.

They are Egypt, Ethiopia, Tanzania, Nigeria, the Democratic Republic of Congo, Pakistan, India and the Philippines.

Worldwide population growth has substantially slowed, will likely peak sometime this century, and is now down to growing less than 1 per cent a year.

But carbon emissions are growing faster, at 1 per cent more this year than in 2021.

Instead of population growth, perhaps a more salient issue is the imbalance of wealth between the Global North and South.

This has been a key issue at this year’s COP27 United Nations climate change conference in Egypt.

Developing countries have been calling for specific funding - known as loss and damage - to cope with the disasters that developed countries’ high emissions are wreaking.

On Monday, Germany and other G7 countries, alongside the V20 group of vulnerable countries, unveiled plans to launch a “Global Shield” against climate risks.

It aims to rapidly provide pre-arranged insurance and disaster protection funding after events such as floods, droughts and hurricanes hit. Pakistan, Ghana and Bangladesh will be among the first countries to receive funding.

Grants vs loans at COP27: Japan defends its outlier status on finance