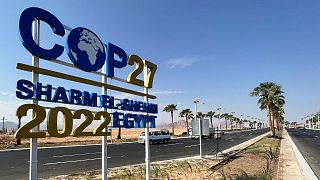 View of a COP27 sign on the road leading to the conference area in Egypt's Red Sea resort of Sharm el-Sheikh town.   -   Copyright  REUTERS/Sayed Sheasha
By Lottie Limb  •  Updated: 18/11/2022

Days away, COP27 is now well and truly dominating the headlines.

From promises to do better to big issues likely to be discussed at vital negotiations, we're beginning to get a picture of what the summit could look like.

This international conference is synonymous with climate change - but what is COP27 exactly, and can it help solve the world’s most urgent environmental problems?

The UN Climate Change Conference (the official name for climate Conferences of the Parties) has happened every year since 1995. These two-week summits are an important space for world leaders, politicians, experts and a whole host of other people to discuss the climate crisis on a global level.

The annual conferences bring together those that signed the United Nations Framework Convention on Climate Change (UNFCCC) - an international environmental treaty addressing climate change - 30 years ago.

Every UN member state is a signatory for the UNFCCC, as well as Palestine, the Cook Islands and Niue. The Holy See is also an observer of the treaty. Effectively every nation, country, or state in the world is involved, giving a total of 197 signatory parties.

Each year representatives from every party come together to discuss action on climate change for the Conference of the Parties or COP. Following COP26 in Glasgow last year, the 27th COP is being hosted in Egypt next month.

What can we expect at COP27?

“The work ahead is immense. As immense as the climate impacts we are seeing around the world,” UN Secretary-General Antonio Guterres said during a recent pre-COP meeting.

“A third of Pakistan flooded. Europe’s hottest summer in 500 years. The Philippines hammered. The whole of Cuba in black-out,” he listed.

Adding that in the US, Hurricane Ian has delivered “a brutal reminder that no country and no economy is immune from the climate crisis.”

The onslaught of climate disasters in 2022 has left little breathing space for the international community to respond. And, as the latest report from the UN's Intergovernmental Panel on Climate Change (IPCC) shows, time is ticking ever more dangerously towards the 1.5C threshold of global warming.

COP27 is taking place over two weeks, from 6 November to 18 November.

The fortnight of negotiations will kick off with a World Leader’s Summit on 7 and 8 November. After this, government officials will tackle some of the weightiest issues surrounding climate including finance, decarbonisation, adaptation and agriculture.

In the second week, big topics including gender, water and biodiversity will be in the spotlight.

An overview of the calendar was published by the UN in August here, with more information on the thematic days available on the COP27 Presidency site.

Though there are no plans for the final day, COPs are notorious for over-running. COP26 in Glasgow didn’t deliver a final agreement until Saturday 13 November.

Where is COP27 being held?

Egypt is hosting COP this year, in the Red Sea resort town of Sharm El-Sheikh.

This is the first COP in Africa since COP22 was held in Morocco in 2016. It’s hoped that it will be an ‘African COP’ in focus as well as location as African countries face some of the worst impacts of climate change.

This UN-managed space is based at the Sharm El-Sheikh International Convention Center (SHICC), just south of the town centre.

Across the road is the Green Zone, which is run by the Egyptian government and open to the public.

The site says it will be an “inclusive” platform where “business community, youth, civil and Indigenous societies, academia, artists and fashion communities from all over the world can express themselves and their voices would be heard.”

Why is Egypt hosting COP27 so controversial?

The question of whose voices will be heard - and whose won’t - is an especially contentious one this year.

COP hosting duties rotate around five UN regional groups. The African group countries decided among themselves who would step forward. Morocco’s Marrakech has hosted twice, as well as Kenya and South Africa; all in the continent’s top six richest nations by GDP.

The UNFCCC secretariat undertook a fact-finding mission to check Egypt has the resources to put on such a huge event. Though this was done by the book, Egypt’s presidency is controversial because of its poor record on human rights.

Since seizing power in 2013, President Abdel Fattah el-Sisi’s government has overseen a widespread crackdown on dissent. At least 65,000 political prisoners are currently behind bars, the Arabic Network for Human Rights Information estimates.

Human Rights Watch states that thousands of people, including children, have been prosecuted in mass trials, “in unfair proceedings lacking the simplest resemblance to due process.”

It’s for this reason that some climate justice campaigners, including author Naomi Klein, are calling this the "Carceral Climate Summit".

Klein is one of the dozens of prominent environmentalists and politicians, alongside Bill McKibben and UK MP Caroline Lucas, who expressed their alarm in a letter earlier this year.

“We are deeply concerned that [a successful conference] will not be possible due to the repressive actions of the Egyptian government,” the signatories wrote.

“Indeed, it seems more likely at this point that the conference will be used to whitewash human rights abuses in the country.”

Around 90 heads of state have so far confirmed their attendance at COP27, a senior Egyptian official said earlier this month.

Special representative for the COP27 presidency Wael Aboulmagd did not give away specific names, but it’s expected that world leaders and representatives from more than 190 countries will attend the summit.

Tens of thousands of negotiators, members of the press and observer organisations will be descending on Sharm El-Sheikh too.

US President Biden is reportedly attending alongside climate envoy John Kerry, despite the conference coming amid the US midterm elections.

I am urging leaders at the highest level to take full part in COP27 and tell the world what climate action they will take nationally and globally.

“COP27 is the place for all countries - led by the G20 - to show they are in this fight and in it together. And the best way to show it is by showing up at COP27 in Sharm El-Sheikh,” says Guterres.

“I am urging leaders at the highest level to take full part in COP27 and tell the world what climate action they will take nationally and globally.”

UK Prime Minister Rishi Sunak has announced he is now attending COP27, after coming under fire for prioritising "other pressing domestic commitments."

A big question mark is still hovering over King Charles III’s attendance. Previous UK PM Liz Truss reportedly “advised” the new monarch - a veteran climate advocate - that he should not go, and Buckingham Palace confirmed he would comply.

Egypt’s minister of foreign affairs, Sameh Shoukry, is taking over from COP26 president Alok Sharma (also attending) and will play a key role at the summit.

Why is COP27 so important?

COP matters because it provides the time and space for world leaders to take stock of the latest climate science and enact change which can only be achieved collaboratively.

More often the conferences are a catalogue of failures, as far as those who most urgently need climate action are concerned.

COP26 saw a flurry of new pledges - around coal, deforestation, methane emissions and more - but ultimately still left us on track to hit 2.4C, according to the Climate Action Tracker.

As well as curbing emissions, developed countries promised at COP21 to provide developing countries with $100 billion (€90 billion) a year for climate mitigation and adaptation by 2020 - a target they are unlikely to reach until 2023 at the earliest.

Now, bearing the brunt of escalating climate change, vulnerable nations are focussed on the third strand of climate finance: loss and damage.

This issue - sometimes likened to ‘climate reparations’ - was pushed back at COP26, and campaigners are determined to see their demands for a loss and damage finance facility met at COP27.

Professor Saleemul Huq, director of the International Centre for Climate Change and Development (ICCCAD), says that from developing countries’ perspectives, COP27 will be a failure from the outset if finance is not put on the agenda.

The need for governments to sit together and negotiate new decisions is far less important than actually doing things.

Sharing his thoughts last month, Professor Huq, one of the few people to have attended every COP, said “the need for governments to sit together and negotiate new decisions is far less important than actually doing things, implementing decisions that have already been made.”

Though 26 years of qualified successes and outright failures have dimmed peoples’ hopes in the COP process, it’s more important than ever that COP27 succeeds where others have failed.

“The war in Ukraine is putting climate action on the back burner while our planet itself is burning,” adds Guterres, leading to some “backsliding” in the private sector around fossil fuels.

“We are in a life-or-death struggle for our own safety today and our survival tomorrow,” he warns.

“There is no time for pointing fingers - or twiddling thumbs. It is time for a game-changing, quantum level compromise between developed and emerging economies.”