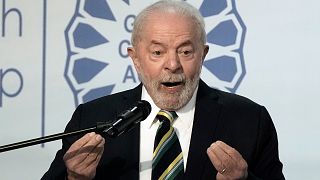 Luiz Inacio Lula da Silva was sworn in as Brazil's president on Sunday marking a new era for the country's environmental policies.

Lula's plans for government provide a stark contrast to far-right former leader Jair Bolsonaro, whose four years in office were characterised by backsliding on environmental protections in the Amazon rainforest and weaker protections for Indigenous peoples and minorities.

Lula says he wants to turn Brazil, one of the world's top food producers, into a green superpower.

In his first decisions as president, he restored the authority of the government's environmental protection agency Ibama to combat illegal deforestation, which had been diluted by Bolsonaro. He also revoked a measure that encouraged illegal mining on protected Indigenous lands.

In addition, he unfroze the billion-dollar Amazon fund financed by Norway and Germany to back sustainability projects, reinforcing his commitment to ending deforestation in the Amazon, which surged to a 15-year high under Bolsonaro.

Lula's pledge to end deforestation in the Amazon rainforest

After his election victory, Lula pledged to reduce deforestation in the Amazon to zero. This pledge featured heavily at COP27 in November.

"There is no climate security for the world without a protected Amazon," he said at the climate conference, adding that Brazil will "do whatever it takes to have zero deforestation and degradation of our biomes."

Brazil will "do whatever it takes to have zero deforestation and degradation of our biomes."

Lula claimed that environmental crime had grown in a "scary way" under the previous government and said he would strengthen bodies to punish illegal activities including gold mining, logging and farming.

He also announced that Brazil would set up a ministry for Indigenous people so that those affected most by these issues would "have a voice of their own."

His return has been welcomed by world leaders, including US President Joe Biden, who said "We look forward to continuing the strong US-Brazil partnership in trade, security, sustainability, innovation, and inclusion."

King Charles of Britain congratulated Lula on his return to office and lauded his environmental approach in a letter disclosed by the British embassy. "I was encouraged to hear you emphasise the urgent need to tackle the climate crisis in your victory speech and at COP27," it read.

What other proposals did Lula make at COP27?

Hundreds of people gathered to see him arrive at a side event with crowds chanting his name.

What a rockstar, can’t even see him! pic.twitter.com/GzOWPG6AzO

He addressed a packed room at the UN climate conference, saying that "Brazil is once again ready to join efforts to build a healthier planet," referencing the recent election as "one of the most decisive in history".

"The survival of the Amazon also depended on the election. Civilisation and values are back. The respect and human rights are back," he added.

Lula criticised world leaders for ignoring warnings about climate change and spending "trillions of dollars" on war "that only result in destruction and death."

As President-elect, he made two proposals during his speech at COP27. The first was that Amazon countries come together to look at the development of the region in an integrated way.

He is seeking a world alliance for food security and the reduction of inequality. First on the list are countries like Indonesia and the Democratic Republic of Congo which, together with Brazil, have more than half of the world's primary tropical forests.

The other was for COP30 in 2025 to be hosted in Brazil - particularly the Amazon region. He hopes that this would help people to really understand the importance of this part of the world.

When Brazil chairs the G20 meeting in 2024, climate will be top of the agenda. Promises of $100 billion (€95 billion) in climate finance also came under scrutiny with Lula saying wealthy nations must deliver on their pledges from COP15 in Copenhagen.

Touching on another hot topic at this year's UN climate conference, he called for progress on a fund for loss and damage saying that "we cannot postpone this debate...it is time to act."