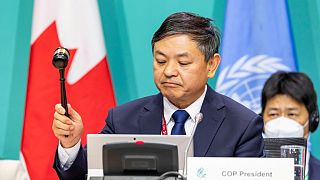 The framework commits nations to protect 30 per cent of the planet by 2030, increase financing for nature restoration and protection, and halt human-induced extinction - among other measures.

The first on that list, the 30x30 pledge, has been the most hotly discussed part of COP15 - and not just because of its pithy slogan. It is arguably the boldest and most tangible feature of the new framework. If implemented, almost a third of land and sea would be protected by the end of the decade.

Though the headlines have focused predominantly on 30x30, it is just one of the framework's 23 targets and four goals. To reach an outcome this comprehensive was “unprecedented”, according to European Commission president Ursula von der Leyen.

It’s undoubtedly an ambitious deal, with more steps to protect nature than ever seen before at this level. But not everyone is happy.

What does the COP15 deal include?

There are four long term goals within the GBF, setting out a vision for 2050.

One focuses on extinction and resilience, including the aim to reduce “the extinction rate and risk of all species” tenfold within the next 28 years.

Also covered is the equitable sharing of digital sequence information, which can include DNA details of organisms. This addresses the issue of biopiracy that has been raised frequently in the build-up to COP15.

Biopiracy is the unlawful appropriation or commercial use of biological materials, such as medicinal plant extracts, that are native to a particular country without providing fair financial compensation to its people or government.

These are fairly broad goals, perhaps understandable as they are written with an end-date of 2050, which is why the 23 smaller targets have been the focus of attention for many.

Among these agreed measures are commitments to:

Has the GBF received a positive reaction?

The reaction to the GBF has been broadly positive, yet its limitations have not gone unnoticed.

“This is a historic moment for global cooperation on the protection and restoration of biodiversity,” says a spokesperson for the Zoological Society of London. “The text is not perfect and the implementation of the framework will be key, but for the moment celebrations are in order.”

Dr Anne Larigauderie, executive secretary for IPBES (the Intergovernmental Science-Policy Platform on Biodiversity and Ecosystem Services), whose work inspired the GBF, says she feels “quite satisfied” with the agreement.

“What was needed to move closer to the sustainable development goals was a framework with targets that were ambitious and quantified, and which addressed the direct and indirect causes of biodiversity loss,” she tells Euronews Green. “I believe that, overall, this is what we have.”

The framework, she continues, has “numbers not only for protected areas and spatial planning, but…for restoration of degraded land and seas, and for pesticides, nutrient loss and harmful subsidies. [There is also] an ambitious commitment for funding, including from developed to developing countries.”

Her “one major regret”? The absence of milestone numbers for the three levels of biodiversity - genetic, species and ecosystem diversity. This lack of granularity means there are only outcomes for 2050 secured, without any intermediary targets.

Despite the impressive breadth of the framework, much of the attention has been focused on the 30x30 target, which formalises a pledge that has existed for a number of years in various forms.

This 30x30 target has been pushed for by various conservation organisations for years, particularly through the Wyss Foundation’s Campaign for Nature.

A report in 2020 from the University of Cambridge found that the financial benefits of protecting 30 per cent of the planet outweigh the costs involved five-to-one. Given that more than half of global GDP depends on biodiversity, perhaps it shouldn’t be surprising that such a monumental figure has been agreed within the GBF.

“The 30x30 target marks the largest land and ocean conservation commitment in history,” says Brian O’Donnell, director of the Campaign for Nature.

Some have hailed it as the ‘Paris Agreement’ for biodiversity. Yet, others say it doesn’t go far enough.

Karl Bukart, deputy director of NGO One Earth, compared the commitment to the lower tier aim within the climate change treaty: “30 per cent to me really does feel like the 2C and the 50 per cent is the 1.5C,” he told a press conference last week.

Haven’t we already agreed to the 30x30 pledge?

A number of countries - including the UK, all EU nations, and Australia - have already endorsed the Leaders’ Pledge for Nature over the last couple of years, effectively signing up to the 30x30 commitment long before the COP15 agreement was reached.

Except, not really. The UK government, for instance, claimed in September 2020 that 26 per cent of the country was already protected - leaving a mere 400,000 hectares left to reach the 30 per cent goal.

Yet just a few weeks ago, Wildlife and Countryside Link, England’s largest coalition of environment and wildlife organisations, reported that only 3.22 per cent of land and 8 per cent of seas in England are effectively protected.

“England is one of most nature-depleted countries on earth,” said RSPB chief executive Beccy Speight at the time the initial commitment was made.

“Two years on, and with just eight to go, there has been next to no progress on the condition or extent of our protected areas - the places our wildlife needs and people value most,” she now reflects.

However, there is renewed hope that the GBF will help hold nations to account, while also working towards standardised reporting.

Others have their doubts about the strength of the agreement though, and at this stage are only cautiously optimistic - particularly as, much like the Paris Agreement, this is not a legally binding commitment.

“Biodiversity leaders meeting in Montreal must realise that the 30×30 framework has a long way to go before it is set in stone,” Dr Hannah Peck, deputy director of NGO Cool Earth tells Euronews Green.

“Efforts to make change are underway but we're concerned that commitments, and the language used to describe them, may be tokenistic.”

Why are the climate and biodiversity COPs separate?

After the enormity of COP27, the presence of COP15 has been a little confusing. Many have questioned why there is a separate summit for biodiversity, and why this can’t simply sit within the scope of climate change action.

But, as O’Donnell explains, while measures like the 30x30 pledge will undoubtedly help tackle global warming, they go far beyond this.

“[The framework] will have major positive impacts for wildlife, climate change, and for securing the services that nature provides to people, including clean water and pollination for crops,” O’Donnell explains.

The agreement should help reverse habitat loss, rebuild damaged ecosystems and reduce pollutants - all things that are distinct from global warming and climate change.

There’s also a renewed focus on marine ecosystems, through the 30x30 target.

Which countries have not agreed to the GBF?

Only two countries in the world did not attend COP15: the United States and the Vatican. While President Biden committed his administration to the 30x30 goal in 2021, the US is notably not a signatory of the GBF.

The Democratic Republic of Congo has also said it is unable to support the adoption of the agreement, after its objections regarding funding responsibilities for developing nations were reportedly overlooked.

Does the GBF address Indigenous rights?

Throughout the framework there are references to Indigenous communities and knowledge - 18 times in fact. This is a major departure from the usual language used in biodiversity commitments, in which Indigenous groups have been largely ignored.

Prior to COP15, the 30x30 pledge was criticised for the potential harm it could do to Indigenous groups. But the move to recognise the rights of Indigenous peoples, as well as the centring of Indigenous knowledge in conservation efforts, has given hope to some.

“I think a lot of change has been coming out of these types of meetings and conferences,” says Indigenous activist, photographer and filmmaker Morgan Tsetta. “Our knowledge is now being regarded as science, so I would love to see that trend continue.”

Others have noted the shift in tone too, including Vivian Figueroa, one of the representatives from the International Indigenous Forum on Biodiversity (IIFB).

"For us, it's like a change of paradigm," Figueroa says. "They are recognising this important role that was invisible."

Despite this, some say the framework doesn’t go far enough in securing a safe and equitable future for Indigenous communities, nor in utilising Indigenous knowledge.

“The livelihoods of people with the longest track record of protecting ecosystems are at stake and their voices are not being heard,” says Dr Peck of Cool Earth. “We see it time and time again - indigenous peoples' rights are perceived as secondary.

The current political situation in Peru is another distressing example of Indigenous people being marginalised and oppressed.

“Over the last 10 days, COP15 has had the opportunity to put the greatest defenders of the natural world at the centre of the biggest agreement for biodiversity. For a truly successful outcome, agreements to safeguard the natural world must be led by Indigenous peoples and local communities. Until then, no frameworks should be adopted,” continues Dr Peck.

For now, only time will tell if Montreal will be the first step in securing the future of our planet and those living on the frontlines of nature’s crises - or a repeat of the Aichi Biodiversity Targets agreed in 2010, which we failed at on every count.