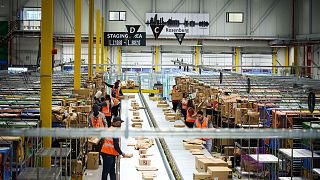 According to a report by ocean advocacy organisation Oceana, Amazon’s plastic footprint increased by nearly a fifth (18 per cent) between 2020 and 2021.

In total, the online retail giant allegedly created 321 million kilograms of packaging waste - mostly in the form of air-pillows, a protective packaging used in parcels.

If laid out, this waste could circle the earth more than 800 times.

Amazon disputed the accusation, claiming to take a “science based approach” to reduce packaging without “compromising customer delivery experience”.

But Oceana accused the retailer of being in denial.

“The science is clear, the type of plastic used by Amazon for its packaging is a threat to the oceans,” says Matt Littlejohn, Oceana's Senior Vice President for Strategic Initiatives.

“Customers and shareholders are calling for the company to act. It’s time for Amazon to, as it has on climate, step up and commit to a global reduction in its use of plastic packaging."

How bad is the global plastic waste problem?

Plastic can take 1,000 years to decompose, filling landfill and littering the ocean.

Of the 10 billion tonnes of plastic that have ever been created, a massive 6 billion sits in landfill sites or in the natural environment.

Recycling is one of the most popular ways of addressing the issue - but it’s a deeply problematic solution. A 2022 report by the Organisation for Economic Co-operation and Development (OECD) found that just 9 per cent of plastic is successfully recycled.

Much of this unrecycled plastic ends up in the sea. By extrapolating on a 2020 study, Oceana estimates that more than 11 million kilograms of Amazon’s waste will eventually wash into the ocean.

Social media users have taken to the internet to slam the use of oversize packaging.

Is Amazon trying to reduce its plastic waste footprint?

In response to Oceana’s claims, Amazon outlined a number of initiatives it has undertaken to reduce plastic use. These include smaller packages and a commitment to make device packaging 100 per cent renewable by 2023.

“Since 2015, we have invested in materials, processes, and technologies that have reduced per-shipment packaging weight by 38 per cent and eliminated over 1.5 million tonnes of packaging material,” a spokesperson added.

However, Oceana says this is not enough - pointing out that reducing packaging weight does not necessarily require a reduction in plastic.

The organisation has called on Amazon to commit to reducing its plastic packaging by a third before 2030.

It also urged the company to publicly report its plastic packaging footprint and the climate impact of all of its products.

It’s not just organisations putting pressure on the company - Amazon is under fire from its own shareholders, too.

At its Annual General Meeting in May 2022, the holders of nearly 49 per cent of Amazon’s shares voted in favour of a resolution asking the company to be transparent and address its growing plastic packaging problem.