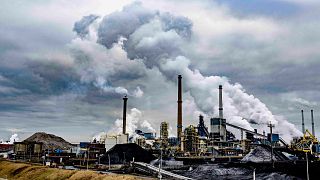 The European Union has just struck a first-of-its-kind deal to impose a carbon tariff on imported goods.

Known as the Carbon Border Adjustment Mechanism (CBAM), its aim is to prevent companies from moving polluting activities to countries with weaker environmental rules.

It also protects European companies from being undercut by cheaper, less environmentally friendly products being imported from elsewhere.

The new bill will be “the first of its kind”, according to the European Parliament.

The CBAM will initially cover carbon intensive industries like iron and steel, cement, aluminium, fertilisers and the production of electricity. Imported hydrogen was also added to the deal after lawmakers pushed for its inclusion during negotiations.

“CBAM will be a crucial pillar of European climate policies,” Mohammed Chahim, the EU’s lead negotiator, said in a statement.

“It is one of the only mechanisms we have to incentivise our trading partners to decarbonise their manufacturing industry.”

Chahim also said that the deal will allow the EU to apply its “polluter pays” policy to industry.

How will the carbon tariff work?

Importers will have to declare emissions directly linked to the production process and if these exceed European standards, get an “emissions certificate” at the price of CO2 in the EU.

The deal was struck on Tuesday (13 December) morning after all-night negotiations. It is part of a package of measures to cut EU emissions by 55 per cent by 2030 and avoid catastrophic climate change.

Will poor countries bear the cost of the carbon tariff?

Some say the carbon tariff will negatively impact those in countries that face some of the worst consequences of climate change.

“Europeans are responsible for double the carbon emissions as the poorest half of the world,” says Chiara Putaturo, Oxfam’s EU tax expert.

“Yet, the EU just agreed to pass the buck to those least responsible by forcing them to pay a tariff despite being hardest hit by the climate crisis.”

Putaturo adds that the EU didn’t accept channelling the revenue into climate finance funds either.

“The EU and EU countries need to increase climate finance funds, especially now that poor countries are going to bear the cost of the carbon tariff.”

Oxfam is calling for the bloc to ensure that money made from CBAM is channelled into climate finance for poor countries. The NGO also says that poorer nations or Least Developed Countries (LDCs) should be given an exclusion or exemption period.