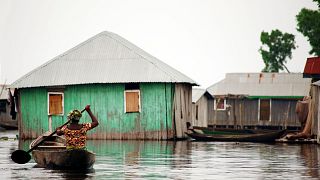 Developing and emerging countries will need $2 trillion (€1.98 trillion) per year by 2030 to cope with climate breakdown, a new report warns.

The money - which covers all of the world’s developing economies except China - would fund a shift to renewable energy and help countries cope with extreme weather.

The figure comes from ‘Finance for Climate Action’, a UN-backed report released on Tuesday.

The report is an investment blueprint for greening the global economy, and for preventing developing nations from pouring money into fossil fuels.

Its authors call for ‘immediate action.’

“Rich countries should recognise that it is in their vital self-interest, as well as a matter of justice given the severe impacts caused by their high levels of current and past emissions, to invest in climate action in emerging markets and developing countries,” says Nicholas Stern, a lead author of the report.

“Most of the growth in energy infrastructure and consumption projected to occur over the next decade will be in emerging markets and developing countries,” he says.

“And if they lock in dependence on fossil fuels and emissions, the world will not be able to avoid dangerous climate change, damaging and destroying billions of lives and livelihoods in both rich and poor countries.”

To avoid this terrible fate, grants and low-interest loans from the governments of developed countries need to double from about $30 billion (€29.7 billion) annually today to $60 billion (€59.5 billion) by 2025.

Where would climate finance come from?

But external finance - like the World Bank, outside investors, and rich countries - must also pitch in.

This type of funding is sometimes known as ‘loss and damage’ - a key issue at this year’s COP.

‘Loss and damage’ is the money paid by rich countries - who are disproportionately responsible for high emissions - to poorer countries, who are currently bearing the brunt of climate change.

For example, Pakistan is responsible for less than one per cent of global emissions, but was devastated by floods earlier this year. These floods took more than 1,700 lives and will cost the country a mammoth $40 billion ($39.9 billion)

What have rich countries promised?

So far, climate finance has been slow. At the 2009 COP in Copenhagen, developed countries agreed to mobilise $100 billion (€101bn) a year by 2020 to support climate action in developing countries. However, this figure has not been delivered.

This new $1 trillion figure is not the same as the $100 billion promise, the report’s author’s explain. It is simply what is necessary to help the world keep global warming under 1.5 degrees.

“The $1 trillion per year is a very different concept - it is a requirement based on an analysis of the investment and actions necessary and the domestic finance potentially available, for an internationally agreed and vital purpose,” they write.

“The $1 trillion is not the new $100 billion. The latter was negotiated, not deduced from analyses of what is necessary for a purpose.”