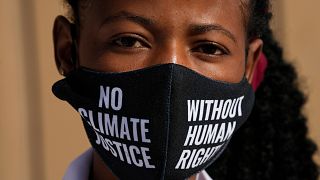 The climate crisis is as much a human rights crisis as it is an environmental one.

So with the eyes of the world on COP27 in Egypt this year, it was bound to bring attention to the host’s own human rights record.

In 2012, the Arab Spring saw Egyptians protesting against an authoritarian government, bringing hope for many after decades of a brutal regime.

But the consequent election of President Sisi resulted in a further crackdown on the rights and freedoms of Egyptians, leaving many influential figures of the revolution exiled or imprisoned.

The climate crisis is a human rights crisis

According to OHCHR (the UN human rights body) climate change has profound impacts on a wide variety of human rights, including the rights to life, self-determination, development, food, health, water and sanitation and housing.

Being a climate activist for many also means, inevitably, becoming a human rights activist too.

In Brazil, members of the Indigenous community, such as the Yanomami, are threatened with violence for protecting the Amazon against illegal mining and logging. Tragically earlier this year, climate activist and Indigenous community leader Bruno Pereira and Dom Phillips, a British journalist, were murdered after investigating human rights abuses in the region.

But it isn’t only a human rights issue in the Global South.

As climate change worsens, the planet will see mass migration as we lose countries to rising sea levels or mass warming of global surface temperatures. Many experts warn that this crisis will result in wars, with civil unrest and an even less equal society expected to unfold in years to come.

It’s clear that human rights are already intrinsically woven into climate justice, yet neither case is seeing anywhere near the progress needed to tackle them at the required scale.

Throughout the recent history of COPs, the effectiveness of these international climate conferences in truly tackling climate change has often been called into question.

With over 600 fossil fuel lobbyists cutting new deals for oil and gas as negotiations took place and a headline sponsor of Coca-Cola, many believe COP27 has been no different.

Improving the reputation of a troubled regime

Authoritarian regimes greenwashing their reputations at summits like these has long been criticised, with some leaders saying they are taking action on climate change while committing internationally recognised human rights abuses at home.

As Egypt took over the COP presidency from the United Kingdom this year, some were concerned that the United Nations was allowing the Egyptian government to improve its troubled image.

In the first few days, the Guardian reported that Human Rights Watch’s website had been blocked by the venue's official WiFi.

Delegates began to panic, worried that downloading the official COP app had left their phones vulnerable to malware such as the Pegasus software - previously used to spy on human rights activists.

Italian human rights worker Giorgio Caracciolo was barred from even entering the country, having his visa rejected at the airport and was soon deported.

One of the biggest gatherings at COP27 was for human rights

As this unfolded, Egyptian human rights activist and stalwart of the 2012 revolution, Alaa Abd El-Fattah began a hunger strike to protest against his ongoing imprisonment and the abuses of Sisi’s regime.

Over the last decade, El-Fattah has been arrested many times for his activism around human rights violations committed by Egyptian security forces and the use of military courts to try civilians. In 2015, he was sentenced to five years imprisonment but was released in March 2019 and then arrested again on 29 September.

He was then held in pre-trial detention for two years before he was sentenced again in December 2021 to five years imprisonment on charges of publishing false news.

El-Fattah’s sister, Sanaa Seif, hosted a press conference on the grounds of COP27 which gathered the largest group of journalists seen at the event. Onlookers were hanging on her every word as she described the suffering of her brother and why he is sacrificing himself to give voice to Egyptians across the country.

An official from the Egyptian government tried to shout her down while Agnes Callamard, the general secretary of Amnesty International, who is supporting El-Fattah’s campaign, challenged the official shouting to “let her speak”.

The official had yelled “you are on Egyptian land” - a threat many believe suggested she was unsafe.

This fleeting protection is enabling human rights activists, alongside established organisations like Amnesty International and Human Rights Watch, to draw attention to the abuses committed by the regime and demand international action.

An event in the German pavilion hosting Sanaa and other human rights professionals gathered one of the biggest crowds seen at the whole of COP27. But even this was not without its threats.

Following on from the packed-out talk, German diplomats at the embassy in Cairo accused Egyptian security officials of monitoring and filming their events, effectively spying upon them and their guests. El-Fattah's lawyer and family were refused entry to see him.

The latter has accused the Egyptian government of force-feeding and begged for proof of life after continuous days of silence from the activist after he began his hunger strike.

The family have since received a letter, saying he is still alive.

What happens now COP27 is over?

Many will wonder what happens after COP27 now the UN and scores of international journalists have filed out.

Will the buck be passed back to the ordinary Egyptians who have been fighting this regime since 2012? Or perhaps the international community, having seen what they are facing, will come together in their defence.

It’s clear that COP27 has applied a magnifying glass to the human rights of ordinary Egyptians.

The question now is if, after experiencing a fraction of what life is like under Sisi’s Egypt, world leaders will finally heed their calls for support.