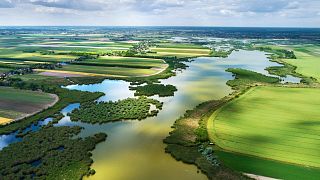 Environmental groups are calling for wealthy nations to boost spending on biodiversity conservation in developing countries, to account for the harm done by international trade.

On Tuesday, groups including the International Union for Conservation of Nature, Campaign for Nature and World Resources Institute, announced a goal of mobilising $60 billion (€54 bn) annually in international biodiversity finance.

This follows developed countries committing to $100 billion (€90 bn) in annual climate financing to help poorer nations which have been disproportionately affected.

"We have a moral obligation to provide developing countries with the means to conserve nature," said Bruno Oberle, director general of the International Union for Conservation of Nature.

We have a moral obligation to provide developing countries with the means to conserve nature.

1 million animal and plant species are currently threatened with extinction - more than ever before in human history. In the Amazon alone, more than 10,000 species are at risk of disappearing due to the clearing of the rainforest for cattle ranching, soy farming and other uses.

More than $700 billion (€631 bn) is needed each year to address the global biodiversity crisis, out of which $500 billion (€451 bn) can be taken care of by canceling harmful subsidies, the groups said. Out of the remaining $200 billion (€180 bn), developed nations should provide 30 per cent.

1 million animal and plant species are currently threatened with extinction.

"International trade is driving about 30 per cent of species' threats globally," explains Manfred Lenzen, a sustainability researcher at the University of Sydney.

What this means, he said, is that wealthy countries are largely able to protect their own habitat and environment while "they outsource all these problematic biodiversity activities elsewhere and import commodities produced in low-income countries."

Will climate finance goals be reached by 2023?

The environmental groups announced the goal ahead of a major round of United Nations' biodiversity negotiations due in Geneva later this month. The goal is to secure wealthy countries' commitment ahead of next month's meeting on the Convention on Biological Diversity in Kunming, China.

In 2009, wealthy nations promised to mobilise $100 billion (€90 bn) per year for climate financing by 2020. But they have fallen short of that goal and latest estimates say it will not be reached until 2023. Despite their poor track record on environmental financing, conservation leaders hope rich nations will understand it is in their interest to act.

"This is not a tax for biodiversity," said Marco Lambertini, director general of World Wildlife Fund International.

"This is an investment in the services that biodiversity is generating for our society, for our economy, for our wellbeing and health."

Conservationists rush to save Georgia’s colchis boxwood trees from extinction