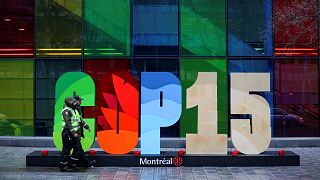 A historic deal has just been made at the end of the two week UN biodiversity summit in Montreal, Canada.   -   Copyright  REUTERS/Christinne Muschi/File Photo
By Rosie Frost  •  Updated: 19/12/2022

A historic deal for nature has just been made at the UN biodiversity conference in Montreal, Canada.

Agreed early on Monday, it is the most significant effort yet to protect the world’s land and oceans and provide finance to prevent biodiversity loss in the developing world.

The UN biodiversity conference - known as COP15 - has been considered the “last chance” for nature's recovery. But throughout the summit, there were disagreements about the strength of commitments and where funding will come from.

Despite last-minute objections from the Democratic Republic of Congo, a deal was signed by nearly 200 countries early this morning (19 December).

“In 2019, scientists sounded the alarm that biodiversity is declining at rates unprecedented in human history and urged global leaders to boldly act,” says Brian O’Donnell, director of the conservation group Campaign for Nature.

“After working through years of a global pandemic and economic and social upheaval, today in Montreal the international community has come together for a landmark global biodiversity agreement that provides some hope that the crisis facing nature is starting to get the attention it deserves.”

What are the main points of the historic deal for nature?

Called the Kunming-Montreal Agreement, the deal has been compared to the Paris Agreement's commitment to keeping global warming below 1.5C.

One of the most significant parts of the pact is an agreement to protect 30 per cent of nature by 2030. This ‘30x30’ target is one of the biggest land and ocean conservation commitments in history.

The deal includes a pledge to reform $500 billion (€471 billion) of environmentally damaging subsidiaries. $30 billion a year by 2030 for conservation in the developing world and protections for Indigenous peoples’ rights are also part of the final text.

Governments also agreed to take urgent action on preventing the extinction of species at threat from human activity and promote their recovery. This comes after recent warnings from scientists that we are bringing about the start of Earth’s sixth mass extinction event.

The Kunming-Montreal agreement is not legally binding but countries will be required to show their progress on meeting targets through national biodiversity plans.

What has been the reaction to the COP15 agreement?

There has been a mixed reaction to what has and hasn’t been included in the deal. While some have celebrated the historic agreement, others are disappointed by weaker pledges on issues like consumption and pesticide use.

One of the contentious points has been the decision not to include the phrase “nature positive” which is considered the biodiversity equivalent of net zero.

“We welcome that the new framework to protect biodiversity does not mention "Nature Positive", one of the proposed greenwashing measures that opened up new possibilities for offsetting biodiversity destruction, rather than halting it,” says Hermantha Winthanage, Friends of the Earth’s International Chair.

“However, the same ideas are still there implicitly. There are also problematic references to biodiversity offsets and credits.”

Rights-based protections are the future of conservation. Direct finance for Indigenous Peoples is a critical next step.

An Lambrechts
Head of the Greenpeace delegation at COP15

The explicit recognition of Indigenous Peoples’ rights, roles, territories and knowledge as important has also been welcomed.

“Rights-based protections are the future of conservation. Direct finance for Indigenous Peoples is a critical next step.”

What does the global biodiversity deal mean for the EU?

Now the Kunming-Montreal Agreement has been made, countries will have to translate it into plans and policies. National strategies will need to be updated to reach the global goal of reversing biodiversity loss by 2030.

“This deal will only be as good as its implementation,” says Sabien Leemans, senior biodiversity officer at WWF’s European Policy Office.

“For the EU, we now have the chance to bring nature back by adopting a strong and ambitious Nature Restoration Law.”

This meeting is the first opportunity for the EU’s environment ministers to exchange their views on the EU Nature Restoration Law. First proposed in June this year, it includes legally binding restoration targets for various ecosystems across the bloc.

WWF says it could be a “huge” opportunity to put our degraded nature on a path to recovery.