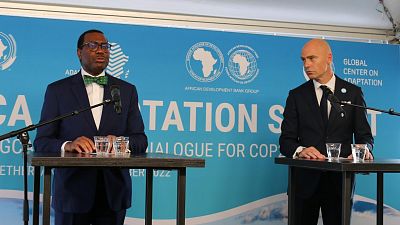 African and international leaders came together in Rotterdam this week to call on industrialised nations to deliver on their pledges and finance the continent’s climate adaptation.

The African Adaptation Summit is being held in preparation for COP27 in Egypt’s Sharm-El-Sheikh in November.

“Rotterdam is a test for Sharm-El-Sheikh. Are we going to do the usual talking or really mobilise financing? This is what would give us hope for COP27,” said President of Senegal and African Union chair Macky Sall.

With African leaders’ endorsement of the AAAP, it is the largest adaptation program to date and, in the words of Ethiopia’s President Sahle-Work Zewde, it could be a “game-changer” for the continent.

The African Development Bank (AfDB) is mobilising half of that amount and the leaders are calling on the industrialised nations to deliver the rest per their long-standing promises.

This is the largest ever global effort on adaptation,” stated, “but we need the money.

“This is the largest ever global effort on adaptation,” AfDB’s President Akinwumi Adesina stated, “but we need the money.”

“The AfDB put down $12.5 billion (€12.6 billion) out of $25 billion so we are not begging. We are saying that we did not cause the problem, we come to the conversation with a good heart and a great commitment, so meet us halfway.”

That amount was never realised. At COP21 in Paris, alongside signing the historic Paris Agreement, countries extended their goal to 2025.

The Glasgow Climate Pact, signed last year at COP26, urged developed nations to "at least double” their collective climate finance for adaptation. The yearly funding gap, however, will likely reach $41.3 billion (€41.6 billion) by 2030 according to the Global Center on Adaptation.

Africa is owed a 'debt of broken promises'

Despite the scale of existing and declared solutions, a sense of disappointment pervaded the African Adaptation Summit.

Those attending criticised the speed at which financial and climate pledges were being delivered.

UN Deputy Secretary-General Amina Mohammed warned that “the Glasgow Pact is at risk of failing” and highlighted that emissions are only rising despite the Paris Agreement.

Yet, African leaders above all expressed regrets that key decision-makers – developed world leaders and the private sector – were not present.

“The higher polluters would have immediate answers for us,” DRC President Felix Tshisekedi stated.

Mohammed added that “what is now at risk is that you add another debt to Africa – one of solidarity and one of the broken promises.”

From industrialised nations’ leaders, only Dutch PM Mark Rutte and the European Commission Vice-President Frans Timmermans showed up at the summit in person.

Traditional donor countries, such as France, the UK, or Norway, sent their ministers for international development as representatives. Danish PM Mette Frederiksen sent a pre-recorded statement.

“I am convinced that [those who are not here] will hear about the importance of this event,” President Tshisekedi asserted.

GCA’s head Patrick Verkooijen expressed the need for “a much deeper conversation with the private sector on how we can bring them to the table” before COP27.

Climate justice against the cost-of-living crisis

The attendees spoke in unison about Africa’s heightened vulnerability to climate change - despite the continent’s minuscule contributions to the crisis.

AfDB’s Adesina highlighted that although Africa has emitted less than 3 per cent of historical global emissions, 9 out of 12 countries most vulnerable to climate change are on the continent. This inequality is the foundation of African countries’ demands.

Beyond climate justice, the leaders highlighted the benefits of timely adaptation efforts.

Paying for climate adaptation is cheaper than paying the bills every time there is a climate disaster.

Ghana’s President Nana Akufo-Addo highlighted that “paying for climate adaptation is cheaper than paying the bills every time there is a climate disaster.”

Yet, the leaders remained acutely aware of how the increasingly difficult living situation across the globe can jeopardise their efforts.

President Akufo-Addo warned that “climate action must not become another casualty of our complex geopolitical circumstances.”

There are just four more meetings before COP27 in November, including a pre-COP in DRC’s Kinshasa. African leaders will continue pushing for climate adaptation financing by demanding action not words and mobilising currently absent players.

“None of us here is naïve,” GCA’s Verkooijen asserted.

“We realise there’s a Ukraine conflict, inflation is up, energy and food prices are up, and that we’re still recovering from COVID.”

“But at the same time, all of us at the summit realise that we can only grow and develop in a green and prosperous way if we take climate change into account.”