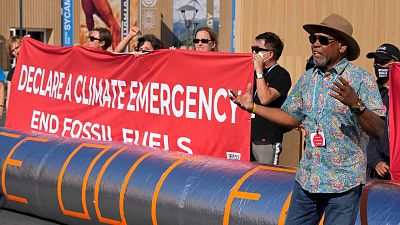 Deadlocked COP27 climate talks received a boost late on Thursday as the EU proposed a loss and damage fund for vulnerable countries.

The EU proposal ties compensation for climate disasters to tougher emissions cuts. The money would be provided by a broad-based funding coalition, the bloc said.

The climate compensation issue has been one of the thorniest issues at the conference, with wealthy nations holding out against the demand.

EU climate chief Frans Timmermans said Friday that a proposal made by the bloc is "a final offer" that seeks to "find a compromise" between nations as negotiators seek a way forward at the U.N. talks in Egypt.

Will other countries sign up to the EU loss and damage fund proposal?

Timmermans said he was "encouraged" by immediate reaction to the proposal and more engagement on the offer is expected Friday.

"This is about not having a failure here," said Timmermans. "We we cannot afford to have a failure. Now, if our steps forward are not reciprocated, then obviously there will be a failure. But I hope I hope we can avoid that."

The head of the European Parliament delegation to COP27, Bas Eickhout, told EFE that the offer "should create the much-needed momentum for this summit"

However, it’s unclear whether other rich nations will sign up. China and Saudi Arabia have insisted that the 2015 Paris Agreement should not be changed and said money for a fund should come from developed nations.

German Foreign Minister Annalena Baerbock said Friday morning that the EU's was “a big step" in the right direction but that she still expected negotiations to run into overtime.

“I packed my suitcase for the whole weekend,” she told German television.

Asked whether China will participate in such a loss and damage fund, Baerbock replied: “We are arguing massively for it.”

How have vulnerable countries reacted to the EU loss and damage proposal?

Vulnerable nations - who have lobbied the conference for the establishment of a loss and damage fund - have had mixed reactions to the proposal.

“Overnight circumstances changed and we hope for a loss and damage deal today,” said environment and climate minister Ralph Regenvavu. "We are happy with the progress made so far,"

But Antigua and Barbuda expressed concerns about the proposal.

Speaking on behalf of small island states, Molwyn Joseph said there are parts of the EU's offer that need “adjusting,” without adding more details.

“We will wait until we meet and bilaterally to discuss the areas of concern,” he said.

Despite his reservations, Joseph said that there was  a “strong possibility” a loss and damage funding agreement would be agreed by Saturday.