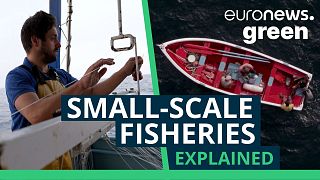 Artisanal fisheries are an important part of the cultural heritage of coastal communities all over the world and provide employment and food to millions of people. As much as 50 per cent of the global catch comes from small-scale fisheries but they are often overlooked.

What are small-scale fisheries?

The line between what is artisanal and what is industrial can be quite blurry as there is no single definition at a global or regional level.

Anna Carlson is a Fishery Officer for socio-economic issues at the General Fisheries Commission for the Mediterranean, the organisation in charge of regional fisheries management and policy-making in the region.

She says that generally “when we speak about small-scale fisheries, we’re talking about vessels up to around 12 metres and vessels using passive gear”, such as throw nets, traps and hooks.

There is also a whole portion of small-scale fisheries that work on foot, such as clam pickers, for instance.

But the small-scale fishing sector is not only about catching seafood.

Women are quite active in fisheries but they're less immediately visible

People cleaning the catch, selling it, or repairing nets, for instance, are key to the value chain but their work is often unnoticed.

This is particularly true for women, whose work remains too often unrecognised and underpaid.

“Women are quite active in fisheries but they're less immediately visible often because they're not always doing the on vessel work, but they're either working as shore fishers or they're working sort of a bit more behind the scenes,” Carlson says.

A sector facing many challenges

All over the world, small-scale fishers face many challenges but the situation is particularly alarming in the Mediterranean Sea.

Climate change, pollution, and overfishing have caused catches to decrease since the 1980s.

Small-scale fisheries represent 82 per cent of the fleet here, however the future of their profession is uncertain.

Carlson explains that fishers are ageing. According to this year’s GFCM report on the state of Mediterranean and Black Sea fisheries, in 2022, 52 per cent of the crew were over 40 years old, while in 2020 it was 49 per cent.

What is making this type of fishing less attractive to younger generations?

“Small-scale fishers are not necessarily poor, some can do quite well. But they are highly vulnerable,” says Carlson.

“They're really vulnerable to shocks, unforeseen climate change, a big storm that might damage their vessel or COVID,” she adds.

Fishing is one of the most dangerous professions in the world

Fishing is one of the most dangerous jobs in the world, with high mortality and accident rates. However this is not what discourages young people, says Marta Cavallé, the Mediterranean coordinator at Low Impact Fishers of Europe, a platform helping fishers become more sustainable.

“Fishing is one of the most dangerous professions in the world but I don't think this is the kind of thing that is preventing the sector to grow or to continue,” she says.

It can also be hard for artisanal fishers to access financial services and key social protection services such as unemployment benefits, health insurance and old-age pensions.

“In some countries in the Mediterranean, because it's not an officially recognised profession with an ID card, for example, they have trouble accessing banks and getting bank loans to be able to then invest in the sector,” explains Carlson.

As artisanal fishers retire or leave the profession, entire communities are affected.

“The sector is not only a food provider, but it's also an economic backbone of coastal communities. So if the fishers disappear, many other economic sectors may disappear or may change a lot,” says Cavallé.

But is it really possible for the profession to die?

According to Carlson, the sector has to be innovative, but there will be a future.

“It has to be innovative. It has to be different. Perhaps it's not a future of fishing in the same way that's always been done in the past. But I think there is there's certainly ways to keep the culture alive and keep that livelihood tradition alive,” she says.

Small-scale fisheries have many challenges to overcome but one of their most powerful weapons is the knowledge they have acquired over centuries.

“The fisherman already has an innate knowledge of how to respect the waters around them or how to respect the fish that they catch and they take a lot of pride in knowing that they have that kind of responsibility,” says Enrico Maria Andreini, senior project manager at FISH MED NET.

The project, which is co-financed by Legacoop Agroalimentare and the European Union, helps small and medium-scale fishers diversify their activities.

In Italy for instance, some fishers have started working in pesca-tourism.

“You go out on the boat and you experience the day out as a fisherman. And he teaches you a little bit more about the history, not only about his own history, but the history of the area itself. So it's kind of like a walking museum on a boat,” he explains.

Others are turning to aquaculture or renting their boats to universities and scientists for research.

Their small size and polyvalence of their skills can help them adapt faster to new challenges.

Fishers are constantly adapting their techniques and gears according to seasons and fish. They have even managed to find new markets for some invasive ones like the blue crab.

During COVID-19 restrictions, for example, some of them started using apps to connect with consumers.

“You can have a situation where it's win-win, where the fishers are actually able to maybe fish less but earn more and the stocks are able to recover,” says Carlson.

The next few years will be crucial to shaping the future of small-scale fisheries.

What it will look like is not clear yet. But one thing is certain, artisanal fisheries will be different to what we’ve known for centuries.