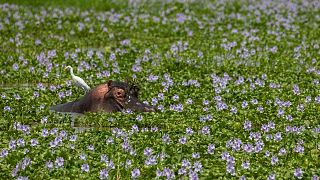 COP15 hopes to set goals for the world for the next decade to help conserve the planet's biodiversity and stem the loss of nature.   -   Copyright  AP Photo
By Lottie Limb  •  Updated: 06/12/2022

COP15 is starting this week - hot on the heels of the UN’s COP27 climate summit in Egypt last month.

If you’ve heard significantly less about the former, that’s part of the problem. The conference kicking off tomorrow is about tackling the world’s biodiversity crisis - which tends to get far less attention than climate change.

So much so that experts like UK ecologist Alex Morss have described ecology’s dire straits as the “Cinderella sister” to the climate crisis. The two are intimately linked, and biodiversity’s moment in the spotlight is long overdue.

“As far as biodiversity is concerned, we are at war with nature. We need to make peace with nature. Because nature is what sustains everything on Earth … the science is unequivocal.”

Biological diversity is the variety of life forms we share the world with, from elephants to bacteria. And it’s fast depleting, unravelling vital ecosystems. Since 1970, Earth’s wildlife populations have already plunged by an average of 69 per cent, according to WWF’s latest report.

Climate change is partly to blame, together with four other key threats: changes in land and sea use; direct exploitation of natural resources; pollution, and invasive species.

So what is the COP15 nature summit, and what can it do about this existential threat?

It was at the 1992 Earth Summit in Rio that three COP conventions were created: on climate change, desertification and biodiversity.

The convention on biological diversity (CBD) commits countries to conserving the natural world, using its resources sustainably, and sharing the benefits of its genetic riches. Almost every nation or state in the world has joined, giving a total of 196 parties. The exceptions are the Holy See jurisdiction and the United States.

The CBD’s governing body is the Conference of the Parties (COP), which meets every two years to review progress. Every 10 years, governments also agree to new targets on protecting biodiversity.

COP15 is one of these special summits. It is occurring more than a decade on from the last agenda-setting biodiversity convention in 2010 (COP10) due to the pandemic.

Where and when is COP15 being held?

Montreal, Canada, is hosting COP15, though China officially holds the presidency - the first time it has done so for a leading UN environmental agreement. The conference was due to take place in Kunming, China, but was moved after pandemic-related delays and concerns about Beijing's zero-COVID policy.

The Secretariat of the CBD sits in Montreal city, Quebec, and the summit is now taking place just around the corner, in the Montreal Convention Centre.

COP15 starts on 7 December and lasts for two weeks. The official text of the outcome is set to be signed off on 17 December, though COPs are often known to overrun.

Part of the reason the nature summit has attracted less attention is because fewer world leaders are in attendance.

The Chinese government, as president of the meeting, was responsible for invites - but only addressed them to ministers and NGO leaders in September, not heads of state.

The consequences, Oscar Soria, campaign director of the activism site Avaaz told the Guardian, “is that the presidency has somehow decided to give to this COP less relevance than it should have.”

Chinese president Xi Jinping is not expected to attend, but Canadian prime minister Justin Trudeau has confirmed he will be there.

There has been talk of Trudeau inviting other interested leaders, including France’s Emmanuel Macron and president of the European Commission Ursula von der Leyen, to a side event - a move that would risk a diplomatic clash with China.

Leading conservationist Chris Packham and Conservative MPs are among those urging UK PM Rishi Sunak to attend COP15, which he has so far ruled out.

“We hope that the same leadership the UK has demonstrated on climate will be extended to fight for an ambitious global deal to protect nature at COP15,” a letter signed by 40 parliamentarians last month reads.

“With a million species facing extinction around the world there is no time to waste.”

Why is COP15 so important?

The planet is undergoing its sixth mass extinction event, scientists have warned.

Broken down, the figures are no less stark: more than 500 land animals are on the brink of extinction; one in eight birds could be wiped out; 30 per cent of tree species are at risk; and insects are facing an ‘apocalypse’ with 40 per cent of global species threatened.

"Human activities are causing the largest loss of life on Earth since the extinction of dinosaurs," Toerris Jaeger, head of the Rainforest Foundation Norway, tells Reuters. "Our behaviour and the way we produce and consume are putting at least 1 million species at risk of extinction according to science, more than ever before in human history."

Even as we continue razing forests, farming cattle, planting monocrops of palm oil and soybeans, trawling the seas, mining and polluting as usual, biodiversity loss is an existential threat to humans too.

People depend on nature, from rivers to wildernesses, to supply them with clean air and water - and to regulate rainfall that is vital for growing food crops. When ecosystems are harmed, their basic life support services can falter, scientists say.

Soil - rich in microbial life - is another key example of how biodiversity is critical to our life support systems. 95 per cent of our food is produced in topsoil, but up to 40 per cent of the world’s land has been severely degraded by unsustainable agricultural practices, the UN says.

What can we expect at COP15?

At this once-a-decade COP, 21 targets are being negotiated that will make up the final global biodiversity framework.

One draft target has received a lot of attention in particular: a commitment to protect 30 per cent of land and sea by the end of the decade - known as ‘30 by 30’. The pledge has gained wide support from at least 110 nations, including the US - a big boost from 70 nations a year ago. (Though the US never ratified the treaty, it still participates and is sending a delegation to Canada).

But there is still uncertainty about what the protected area designation means in practice, and whether Indigenous peoples’ rights will be sufficiently safeguarded.

Other targets include proposals to curb the spread of invasive species, reduce pesticide use by two-thirds, and reallocate billions of euros worth of environmentally harmful agricultural subsidies.

‘Digital biopiracy’ is also being discussed, with developing countries demanding they are paid for drug discoveries that use the genetic data of their biodiversity in digital form. Money more generally is set to be a big obstacle, as poorer, nature-rich nations also need the funding to protect the resources the whole world depends on.

Delegates will be managing their expectations. No biodiversity COP targets have yet hit their mark - including the 2010 resolution to halve the loss of natural habitats and expand nature reserves to 17 per cent of the world’s land area by 2020.

Leaders must secure a global agreement for biodiversity that is as ambitious, science-based and comprehensive as the Paris Agreement is for climate change.

Yet COPs have, on occasion delivered: most notably the 2015 climate summit (COP21) in Paris which saw virtually all countries agree to limit global warming to 1.5C. That has been the north star of climate COPs ever since - and campaigners now want to see a similar pact forged at the nature summit.

“Leaders must secure a global agreement for biodiversity that is as ambitious, science-based and comprehensive as the Paris Agreement is for climate change,” the architects of that agreement - including Christiana Figueres and Laurence Tubiana - wrote to world leaders last month.

“Like the Paris Agreement, it must encourage countries to pledge and also ratchet up their action commensurate with the size of the challenge. And it must deliver, through the whole of society, immediate action on the ground - our future depends on it.”