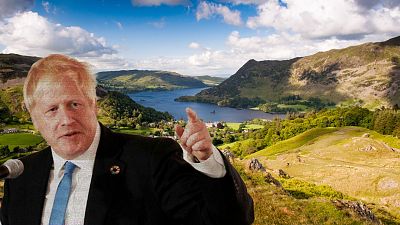 The UK has pledged to protect 30 per cent of its land by 2030, in a bid to safeguard biodiversity.

Prime Minister Boris Johnson is formalising this commitment today as part of the Leaders’ Pledge for Nature, a global campaign backed by heads of state from around the world. Over 60 world leaders have signed the pledge, committing to fight pollution, eliminate plastic waste from the oceans, and encourage sustainable economic policies.

The UK is one of the first nations to outline its plan for meeting the 30x30 goal launched by the Campaign for Nature earlier this year. The campaign calls for 30 per cent of the planet’s land to be designated as a protected area in order to halt wildlife loss, as well as boost the global economy.

Currently 26 per cent of land in England is already a protected area; this includes existing national parks and ‘Areas of Outstanding Natural Beauty.’ Over the next decade, 40,000 hectares in England will be designated as protected land - the equivalent size of the Lake District and South Downs national parks combined.

“We must turn these words into action and use them to build momentum, to agree ambitious goals and binding targets,” Boris Johnson said while signing the pledge.

“We must act now – right now. We cannot afford dither and delay because biodiversity loss is happening today and it is happening at a frightening rate. Left unchecked, the consequences will be catastrophic for us all.

“Extinction is forever – so our action must be immediate.”

What is the Leaders’ Pledge for Nature?

The Leaders’ Pledge for Nature aims to support the global restoration of biodiversity, reversing the current rate of loss by 2030. Since 1970 alone, global wildlife populations have declined by 68 per cent.

So far it has been signed by leaders from 64 countries, including the whole of the EU, Canada, New Zealand, India, and Costa Rica. All six populated continents are represented, although major nations like the USA, China, and Australia have yet to sign.

“To have the impact required, we must also think of scale,” states His Royal Highness Prince Charles of the pledge.

“Global mega projects such as 30x30, the Great Green Wall, Africa 100, the 2020 initiative and many others have the potential not only to improve natural capital, but also to increase opportunities in the green economy, while improving sustainable livelihoods and local economic growth.”

The 30x30 goal is a core part of the Leaders’ Pledge for Nature, following on from extensive research by scientists this year to create the figure.

"Scientists are telling us that protecting at least 30% of the planet by 2030 is the minimum amount of protections needed to help confront the escalating crisis facing nature,” explains Brian O’Donnell, Director of the Campaign for Nature.

“For our collective efforts to be successful, we must also ensure that any global biodiversity strategy respects and promotes Indigenous Peoples’ rights and is backed by significantly increased funding."

People who have worked on the research behind the target have also commented how optimistic they now feel about the future, as major world leaders lend their support to the campaign.

"As a scientist who has dedicated his life to the protection of the natural world, I welcome these endorsements of protecting 30% of the world's land and ocean by 2030 from the highest level,” says Enric Sala, the National Geographic Society’s explorer in residence.

“It is the exceptional leadership that we need in these times."

Speaking ahead of the pledge meeting, Dr Sandra Schoettner of Greenpeace’s Protect the Oceans campaign, said countries need to put the planet at the centre of any COVID recovery plans.

“2020 is a year of colliding planetary emergencies. Environmental degradation has created the conditions for dangerous new diseases to emerge, fires to rage and the Arctic to melt. People all around the world are demanding their governments seize this moment for change.

"World leaders need to make up for the lost time and commit to a Global Ocean Treaty and an urgent recovery plan for nature. Governments need to put protecting our planet at the heart of a global recovery that can tackle climate breakdown, biodiversity loss, hunger and further pandemics.”