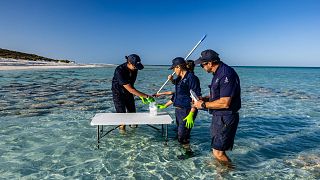 Marine sanctuaries are supposed to protect ocean life - but what can they do when this life moves away?

As climate change heats the planet’s seas, many marine species are permanently migrating in search of cooler habitats.

“We need to protect these biodiversity hotspots, because if we're protecting these hotspots that has a spillover effect to the rest of the ocean,” she says.

“But if we’re not protecting the right areas, it makes no sense.”

UNESCO manages a global network of 50 ‘beacon of hope’ marine sites - but shifting migration patterns are challenging their borders.

To tackle this problem, the UN body is rolling out a massive citizen science project.

A new global location map will use the ground-breaking concept of ‘environmental DNA’ to track where species are moving.

“It will allow us to just simply protect what needs to be protected,” says Dr Douvere.

How much are species moving?

Our oceans are vital to all life on earth. hey They host a huge variety of creatures with up to 2,000 new species discovered every single year. Vast reserves of phytoplankton produce at least half the oxygen on earth. Seagrass meadows act as massive carbon-sinks, while fish are a source of food and income for millions.

But oceans are also particularly vulnerable to climate change.

According to the US National Oceanic and Atmospheric Administration, more than 90 per cent of the warming that has happened on Earth over the past 50 years has occurred in the ocean.

For example, the Great Barrier Reef - the first UNESCO world heritage marine site - is vulnerable to crown-of-thorns starfish, which thrive in warmer waters and devour coral.

Tracking such changes is crucial to marine management. But scientists have a weapon in their arsenal - environmental DNA.

What is environmental DNA?

When a fish moves through the water, it is constantly shedding bits of itself - be it dead skin cells or mucus.

The DNA in this organic matter is known as environmental DNA (eDNA). When scientists sample the water, they can tell that the fish was there - even if it swam away long ago.

“With humans, just a string of hair, or just a drop of blood, can [give you] an enormous amount of information about a person,” explains Dr Douvere.

“It's the same with the environment. Just a litre of water - which is what we are sampling now at most sites - can give you information on hundreds of species.”

The data will be collected in collaboration with local schools, helping to get the next generation of scientists interested in ocean conservation.

All data will be processed and published by the Ocean Biodiversity Information System (OBIS), the world’s largest open-access data system on the distribution and diversity of marine species. It is maintained and collectively supported by a worldwide network of thousands of scientists, data managers and users.

Such open science is the future, Dr Douvere says.

“Research shows us actually that 50 per cent of the biodiversity research that is being done today sits behind paywalls,” she explains.

“This environmental DNA initiative stands for open science because that's where society needs to go.

“We need … the most brilliant people all over the world and all the different continents to work together to solve this biodiversity crisis.”

The project was launched in time for COP15, the UN’s global biodiversity conference.

Its mission could not be more urgent, explains Elizabeth Sinclair, an evolutionary biologist who has partnered with UNESCO to deliver the eDNA program in Western Australia’s Shark Bay.

“We've lost so much of our natural world,” she says.

“It's all been modified so much, so it's really important that we actually maintain those systems that are still intact and that we limit our impact on them.”

Is there still time to restore our oceans? We asked marine experts