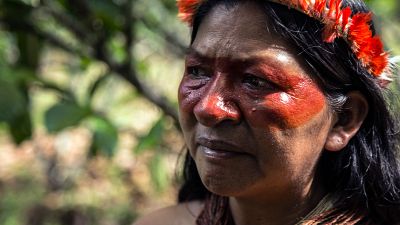 One million animal and plant species are at risk of extinction right now - and that number is only growing.

Ecological decline on this scale has never been seen before, with scientists and policymakers rightly concerned as to what this means for our collective future. But the solution to protecting biodiversity on this planet could lie with Indigenous communities.

This new finding was highlighted by the UN in a landmark report last year from the Intergovernmental Science-Policy Platform on Biodiversity and Ecosystem Services (IPBES). IPBES chair, Sir Robert Watson, says the report “presents an ominous picture,” as humans “are eroding the very foundations of our economies, livelihoods, food security, health and quality of life worldwide.”

Let’s face it, the figures are bleak - two-thirds of the marine environment and three-quarters of land-based environment have been significantly altered. Two-thirds of the world's wildlife has been lost since 1970. However, among it all, there are some statistics that should both give us a sense of optimism and force a major rethink in how we tackle the biodiversity crisis.

The report found that in areas held or managed by Indigenous Peoples and local communities (non-indigenous people considered to have strong ties to the land) the ecological decline was far less severe - and in some cases, had been avoided altogether.

Around a quarter of global land area is owned, managed, used, or occupied by Indigenous Peoples. These territories are located across the world, with a particular concentration in the Americas.

A study from the University of British Columbia (UBC) expanded on the findings of the UN report, examining how Indigenous-managed lands “play a critical role in helping species survive.”

Collaborating with Indigenous land stewards will likely be essential in ensuring that species survive and thrive.

The research team at UBC focused on three of the world’s biggest countries, Australia, Brazil and Canada, analysing land and species data across the nations.

They observed that the highest concentration of birds, mammals, amphibians, and reptiles was consistently found on lands managed or co-managed by Indigenous communities.

"This suggests that it's the land-management practices of many Indigenous communities that are keeping species numbers high," says lead author Richard Schuster. "Going forward, collaborating with Indigenous land stewards will likely be essential in ensuring that species survive and thrive."

This sentiment is echoed by co-author Nick Reo, himself a citizen of the Sault Ste. Marie, Ontario tribe of Chippewa Indians. Reo explains, “Indigenous-managed lands represent an important repository of biodiversity in three of the largest countries on Earth.

"In light of this, collaborating with Indigenous governments, communities and organisations can help to conserve biodiversity as well as support Indigenous rights to land, sustainable resource use and well-being."

Yet a landmark study revealed today by the UN found that Indigenous communities only have legally recognised rights to less than half of their territories. In order to collaborate with and learn from Indigenous communities - who should be centred in any policy around biodiversity - their legal rights need to be addressed too.

"This data shows what scientists have been saying for years: Indigenous Peoples and local communities must be co-authors, not just participants, in climate and biodiversity solutions,” says Tuntiak Katan, Indigenous Shuar of Ecuador and General Coordinator of the GATC.

What are these communities doing to protect biodiversity?

There is no single action being undertaken by Indigenous Peoples to protect the environment; their success derives from a series of factors, practices, and efforts. Worldwide, these communities have been able to safeguard lands and species through a combined approach, including monitoring species-rich landscapes and fighting against land degradation.

Observing and tracking ecosystems is vital to conservation efforts, and Indigenous Peoples have a significant role in long-term monitoring. In part, this is because some of the most remote areas in the world are home to these communities - such as in the Amazon or the Arctic.

“That monitoring role can be really important, particularly where we don’t have a long-term scientific presence,” Pamela McElwee, one of the lead authors of the IPBES report, told Scientific American.

“It’s really these communities that are collecting the data, often through everyday experiences, so they can report back trends for species, population numbers over time, interactions between species, and noticeable declines.”

The IPBES report also noted that Indigenous communities create landscapes which are far more diverse than land typically used for agriculture, often combining wild and domestic species in gardens to create vital habitats. Plus, these groups are often using their unparalleled understanding of that environment to restore degraded lands.

For example, some Angola Indigenous communities, including the Herero, the Khoisan and the Muimba, collaborated with Global Environment Facilities (GEF) to help rehabilitate degraded pastoral and agricultural lands which had been devastated by drought. This improved pasture management has since been vital in protecting food security in the country.

Aboriginal social-ecological systems in the area have been found to be far more resilient and sustainable than European methods post-colonisation.

Native American tribes have also been part of restoration and conservation efforts in the USA’s Pacific Northwest, where large swathes of public lands are also Indigenous communities’ ancestral homelands. Aboriginal social-ecological systems in the area have been found to be far more resilient and sustainable than European methods post-colonisation, meaning critical food resources, like salmon, were better managed and more secure.

The UN and researchers around the world have made it clear that in order to halt the planetary extinction crisis, engaging with, learning from, and supporting Indigenous Peoples is key.

Historically, these people have been excluded from their land, threatened by loggers and other financially-motivated parties, and given no voice in the broader environmental conversation.

Though Indigenous communities are doing the most to protect the planet, statistically it is those same people who are most at-risk in the climate crisis.

The IPBES report also noted that “the areas of the world projected to experience significant negative effects from global changes in climate, biodiversity, ecosystem functions and nature’s contributions to people, are also areas in which large concentrations of Indigenous Peoples and many of the world’s poorest communities reside.”

Effectively, though Indigenous communities are doing the most to protect the planet, statistically it is those same people who are most at-risk in the climate crisis.

The organisation recently launched its Rainforest Resilience Fund, making an urgent appeal to provide food and sanitation for Indigenous communities who are facing the impacts of coronavirus.

“Cool Earth’s long-term focus will always be protecting rainforest alongside local people, but in the last month, we have been inundated with calls for urgent aid from almost every one of our partner communities,” explains the charity’s director Matthew Owen. “Essential supplies of food and hygiene equipment are needed immediately to keep people safe and healthy, along with resources like seeds and tools to prepare for the coming months.”

The fund has seen significant support, meaning hundreds of families have already received aid during these challenging times.

“By supporting Indigenous communities that live in rainforest, we can help them continue to be the guardians and custodians of the rainforest that we all need,” adds Cool Earth’s ambassador and television presenter Gillian Burke.

Cool Earth’s broader mission is exactly the approach to environmental action that researchers, and now the UN, are calling for. By placing Indigenous Peoples at the heart of environmentalism, taking their lead and following their examples, we have a chance to limit the extent of the extinction crisis and protect our vital ecosystems around the world.

As UNESCO Director-General Audrey Azoulay concludes, “our local, Indigenous and scientific knowledge is proving that we have solutions and so no more excuses: we must live on earth differently.”