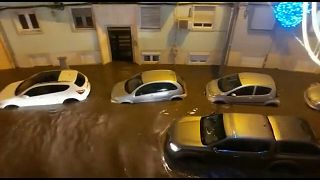 There have been more than 20 extreme weather events in Europe since August alone. At this point we should probably just call it weather, as it’s averaging at at least one occurrence per week.

Water has played a huge role in many of the disasters - with extreme droughts threatening people’s livelihoods in the summer then intense flooding destroying homes in the autumn.

Here we take a look back at everything that’s happened since the start of August in Europe.

Where in Europe has struggled with droughts in the past five months?

July was the hottest month in Spain since at least 1961, leading to droughts and worryingly low water levels. Spanish reservoirs were at just 40 per cent of capacity on average in early August, well below the ten-year average of about 60 per cent, official data showed.

To the delight of some archaeologists, drought at the Valdecañas reservoir - revealed a prehistoric stone circle. Officially known as the Dolmen of Guadalperal but dubbed the Spanish Stonehenge, the circle of megalithic stones is believed to date back to 5,000 BC.

Further east, the water levels of the Danube dropped enormously due to droughts and extreme heat. In mid-August dozens of explosive-laden German warships from World War Two were uncovered by diminishing waters near Serbia's river port town of Prahovo.

October was Europe’s hottest on record. Though many enjoyed an extended summer and more opportunities to hit the beach, in the long run it’s not good news. It’s a sign that extreme weather is now a constant in our lives.

By mid November, although the extreme temperatures were gone, fish in Italy’s Po river were struggling as the reduced water levels meant many pods were trapped in low oxygen waters. Locals just outside of Turin began a rescue mission to save fish in the Orchetto River, one of the Po’s tributaries.

What other problems do droughts cause?

While countries dried out in the blistering heat of the summer, new parts of Europe began experiencing wildfires.

Southern European countries such as Portugal and Greece experience fires most summers, but hotter temperatures pushed wildfires north, with Germany, Serbia, Slovenia and the Czech Republic among those hit this year.

The wildfires were not only contained to the summer months and the hotter temperatures brought wildfires for longer this year. On October 28 dozens of wildfires flared up in northern regions of Spain.

By Autumn so much land was scorched from extreme heat that it is now unable to absorb large amounts of rain, causing devastating floods.

On September 16 at least 10 people were killed by torrential rain in the central Italian region of Marche.

On October 15 heavy floods on the Greek island of Crete claimed one life after sweeping away cars and flooding homes.

On November 21 heavy rains caused flooding in northern parts of Albania leaving villages submerged. The Lead Mosque in Shkodra city was surrounded by floodwater and a nearby bridge was partly demolished by high levels of the Buna River.

Just a few days later in Italy on November 26, heavy rain caused a landslide on the holiday island of Ischia which engulfed buildings. At least 12 people were killed.

Now in early December, Lisbon has been plagued with floods. Twice in the space of six days, the Portuguese capital found its homes and businesses underwater.

Watch the video above to see a full timeline of Europe’s extreme weather events.

Floods, tornadoes, snow and delayed flights in Europe and US