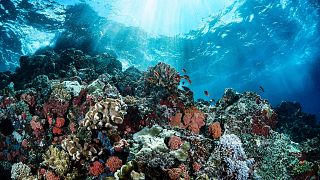 Scientists hope to save the Great Barrier reef by freezing and storing coral larvae.

Spanning 2,253 kilometres along the coast of northeast Australia, the massive underwater jungle is one of the great wonders of the natural world.

But the unique ecosystem is under threat from coral bleaching and invasive species.

Now, scientists have made a breakthrough in a surprising new area - cryogenics.

For the first time, they’ve managed to freeze coral larvae. This could be used to ‘rewild’ the reef in future, said Mary Hagedorn, Senior Research Scientist at Smithsonian National Zoo and Conservation Biology Institute told Reuters from the AIMS lab.

"If we can secure the biodiversity of coral … then we'll have tools for the future to really help restore the reefs and this technology for coral reefs in the future is a real game-changer," she said.

How could freezing coral help save the Great Barrier Reef?

The Great Barrier Reef is severely threatened by climate change. It has suffered four bleaching events in the last seven years including the first ever bleach during a La Nina phenomenon, which typically brings cooler temperatures.

Last month, a joint report from the UNESCO World Heritage Centre and International Union for Conservation of Nature recommended that the reef “be inscribed on the List of World Heritage in Danger”.

The most important way to help the reef is to bring down global temperatures. But scientists are also looking to technology for novel ways to preserve its unique corals.

Cryogenically frozen coral can be stored and later reintroduced to the wild but the current process requires sophisticated equipment including lasers.

In a December lab trial, the world's first with Great Barrier Reef coral, scientists used the cryomesh to freeze coral larvae at the Australian Institute of Marine Sciences (AIMS). The coral had been collected from the reef for the trial, which coincided with the brief annual spawning window.

The cryomesh was previously trialled on smaller and larger varities of Hawaiian corals. A trial on the larger variety failed.

“This new technology that we’ve got will allow us to do that at a scale that can actually help to support some of the aquaculture and restoration interventions,” said Jonathan Daly of the Taronga Conservation Society Australia.

The trials involved scientists from AIMS, the Smithsonian National Zoo and Conservation Biology Institute, the Great Barrier Reef foundation and the Taronga Conservation Society Australia as part of the Reef Restoration and Adaptation Program.