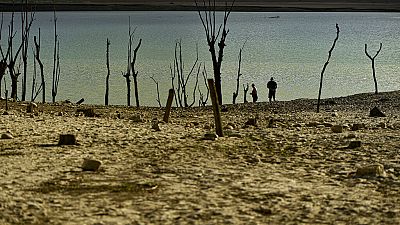 From heatwaves to wildfires, droughts and then flooding, this summer has seen major weather disasters right around the world - all exacerbated by climate change.

A new study has concluded that human emissions have already pushed the Earth over tipping points into danger zones. Passing these thresholds can lead to large, irreversible changes.

What are climate 'tipping points'?

The research, carried out by scientists at the University of Exeter in the UK, shows that at least five dangerous "tipping points" for the planet are rapidly approaching.

These include the collapse of the Greenland and West Antarctic ice sheets, a sudden melting of the permafrost in northern regions, coral reefs dying off and the collapse of an important ocean current in the North Atlantic.

When change in that part of the system becomes self-sustaining, so it will keep on going even if warming was to actually start falling afterwards.

"What we mean by a climate tipping point is when some part of a climate system, for example, an ice sheet, an ocean current...when change in that part of the system becomes self-sustaining, so it will keep on going even if warming was to actually start falling afterwards," says Dr David Armstrong McKay, the study's lead author and climate-biosphere scientist at the University of Exeter.

The first study on the subject, published in 2008, identified nine potential climate tipping points. Since then, research into climate science has progressed significantly.

"We reassessed over 200 papers published since [2008], and we have come to the conclusion that at least five climate tipping points are already possible now, and four of those become likely beyond 1.5 degrees of warming," Dr Armstrong McKay adds.

Multiple climate tipping points could be triggered if global temperatures rise beyond 1.5C above pre-industrial levels, according to the research. Human emissions so far have already pushed the planet into a danger zone.

"We think this provides really strong scientific support for the more ambitious Paris Agreement aim of 1.5C because even though we can't rule out climate tipping points happening at that level, it would reduce the likelihood of hitting any more of them," explains Dr Armstrong McKay.

But the new analysis indicates that we may have already left 'safe' climate limits when temperature increases exceeded around 1C. Keeping global warming below 1.5C would significantly reduce the risk of reaching these dangerous tipping points in the near future.

To have a 50 per cent chance of doing this, global greenhouse gas emissions must be cut in half by 2030 and net-zero reached by 2050.

Will King Charles III have to give up his climate activism?