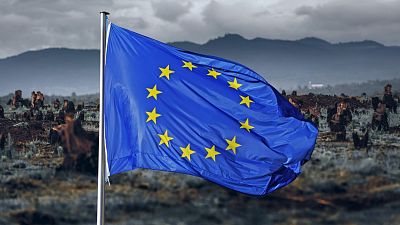 The EU has fallen behind on the UN Sustainable Development climate action goals.   -   Copyright  Canva
By Rosie Frost  •  Updated: 23/07/2020

Countries in Africa and Asia have reached the UN’s climate action goal, as European nations fall behind.

The UN's 13th Sustainable Development is climate action; countries have to reach five targets, including measures for reducing carbon emissions and investment in climate resilience.

According to the Sustainable Development Report 2020, 43 countries in Africa and many more across Asia and Latin America have managed to meet these climate action goals.

In Europe, Moldova is the only country to have achieved SDG:13.

The world’s second-largest CO2 emitter, the US, was found to have moved further away from goal 13 in the last few years, after President Donald Trump withdrew from the Paris agreement and removed a number of other environmental protections.

The map below plots the progress of countries around the world. Those that have successfully met all five of the criteria for SDG:13 are green, while those still with major challenges are in red.

From a list of the countries with the top 10 worst carbon emissions, only India achieved the goals of reducing energy-related, exported and imported CO2 emissions. Together these 10 countries, which includes the EU as a whole, produce 68 per cent of all global greenhouse gas emissions. Unless these countries begin to address climate change in a meaningful way, the Paris Agreement goal of warming below 1.5°C will likely not be met.

Major efforts are needed to “accelerate progress towards climate mitigation and biodiversity protection” in OECD countries which includes France, Germany and the UK. “These countries need to undertake greater efforts to decouple economic growth from negative environmental impacts, particularly in the wake of COVID-19,” the report says.

A set of interconnected goals

Pakistan, one of the countries to meet climate action goal ahead of the 2030 deadline, says its success came about through investment in clean energy, electric vehicles and green jobs as well as large-scale reforestation and biodiversity projects. It is one of the countries most vulnerable to the effects of the climate emergency.

“With strong political will, increased investment, use of technology and mutual collaboration, it is evident that we can limit the increase in global mean temperature to two degrees Celsius or less, above the pre-industrial level,” said UNDP Pakistan representative, Aliona Niculita. She added that meeting this target would require continued collective action and “meaningful and effective partnerships”.

“I would like to highlight that the SDGs are not 17 individual goals, but are rather interconnected,” said the Prime Minister’s Advisor on Climate Change, Amin Aslam in a statement released on Twitter. “Progress in one goal can both depend on and unlock progress in another– & interconnected goals require an interconnected approach.”

Do these goals go far enough?

With 10 years left until the 2030 deadline for the SDGs, the UN report found that, despite COVID-19, there had overall been considerable progress towards meeting all 17 of the goals.

“The SDGs were adopted to address unnecessary risks and fragilities across the economic, social, and environmental domains,” explains the report. “These include poverty, widening inequalities in income and access to decent lives, continued high disease burdens, and of course massive environmental destruction.

“These warnings are today more pertinent than ever.”

But some scientists have said that the SDGs do not go far enough in addressing climate change. A paper published in journal Nature earlier this year said that while most countries were showing good progress toward the environmental SDGs, it had very little impact on actual biodiversity and conservation.

Where trends show countries generally succeeding in meeting the 101 environment based Sustainable Development Goal Indicators, external indicators of biodiversity and environmental protection did not show the same positivity. Instead, the study says, progress on SDGs seemed to be linked to socioeconomic development.

“If this continues, the SDGs will likely serve as a smokescreen for further environmental destruction throughout the decade,” the authors write.