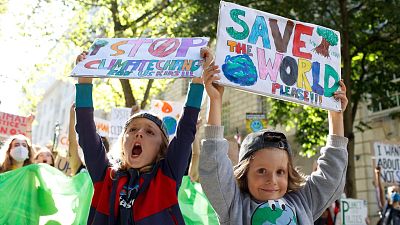 More than two thirds of children between the ages of seven and twelve are worried about climate change, a new survey reveals.

Anxiety about the state of the planet is on the rise - and young people are particularly vulnerable.

The survey by eco-grocery start up Modern Milkman found that 71 per cent of children born between 2010 and 2015 are increasingly concerned about changes in the environment.

More than a quarter (27 per cent) of the 1000 respondents cited the impact on animals as their most pressing concern, while one in five (19 per cent) fear plastic pollution.

Almost a fifth of children were most worried about rising temperatures.

“The results show that environmental challenges are having a prominent effect on the children of today, proving that it’s never been more important to educate communities on the actions they can take to protect our planet," said Simon Mellin, CEO and Founder at Modern Milkman.

What do young people think of the climate crisis?

The climate crisis can be overwhelming.

Statistics often paint a dire picture of the earth’s trajectory. The UN has warned that existing climate pledges provide ‘no credible pathway’ to preventing temperatures from rising 1.5 degrees above pre-industrial levels. Deadly floods and fires are on the rise, while global wildlife populations have shrunk 70 per cent since 1970.

Presented with these facts, it’s easy to sink into eco-anxiety. Previous studies have proven that this distress is heightened in children and the new survey confirms this. But it also suggests that young people believe in their own power to make a difference.

The vast majority (85 per cent) think that it is everyone’s responsibility to tackle the issue. Nine in ten (91 per cent) believe that personal actions can have a positive impact - and of those, 64 per believe in reuse and refill packaging.

Damaging plastic debris takes millions of years to decompose. Of the 10 billion tonnes of plasticcreated since its invention, a whopping 6 billion tonnes sits in landfill sites or pollutes the environment.

"Plastic pollution has been cited as one of the top three environmental concerns for children today, particularly how this affects our oceans," Mellin said.

The grocery start up says it has saved over 59 million plastic bottles to date through its reuse and refill milk bottle program.

How can we help children deal with eco-anxiety?

Adults have a role in inspiring children to act on climate, the research shows.

Generation Alpha cites Sir David Attenborough (46 per cent) as their top inspiration and greatest educator for tackling environmental issues, with their school or teacher (37 per cent) and family (23 per cent) falling close behind.

Children will inherit the world that today’s climate activism creates - so it is crucial that leaders listen to them. Recent years have seen some positive developments in this direction. At this year’s COP27, children and young people had their own dedicated pavilion for the first time.

Many young people are deeply passionate about the planet, as evidenced by Greta Thunberg’s ‘Fridays for Future movement’ which has seen millions of children and teenagers walk out of school since it began.