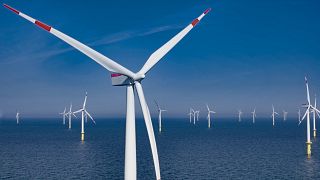 2022 saw the rapid global expansion of renewable energy.   -   Copyright  Canva
The opinions expressed in this article are those of the author and do not represent in any way the editorial position of Euronews.
By Lottie Limb  •  Updated: 21/12/2022

As we look back at 2022, it’s not all doom and gloom when it comes to climate action.

Progress has been made on a number of fronts, with the growth in renewable energy leading the charge - in the EU, solar power soared by almost 50 per cent this year.

COP27 ended with an agreement to provide loss and damage funding for countries hit by climate disasters - a breakthrough step towards justice for developing nations.

And those fighting for climate justice through courts and on streets found success with ClientEarth holding the UK government to account on its net zero strategy, and more young voices being heard than ever before.

People using their skills to push for a better future haven’t given up hope, so neither should we. Here are six reasons to be positive about climate action from 2022, according to people who work on the issues full time.

You can also read more than 100 positive environmental news stories from 2022 on Euronews Green.

6. London’s ULEZ expansion will clean our air and protect our climate

In 2023, London will expand its Ultra Low Emissions Zone (ULEZ), which tackles air pollution by charging cars that don’t meet pollution guidelines to drive in certain parts of the city.

Leo Murray, co-founder of Possible - a charity that empowers people to take practical climate change action - tells Euronews Green why this is his top positive story of the year.

“Earlier this year, my daughter was diagnosed with asthma, and on a high pollution day we had to call out the paramedics. It was one of the scariest days of my life. Of the 4,000 premature deaths in London attributable to toxic air, most are in outer London where the benefits of the ULEZ aren’t yet felt.

We’ve successfully secured a commitment from the Mayor for ULEZ to cover the whole of London from next year, protecting 5 million more people.

“That’s all set to change now that we’ve successfully secured a commitment from the Mayor for ULEZ to cover the whole of London from next year, protecting 5 million more people. If you look at London’s air, London’s climate targets and London’s congestion problem, it’s clear that this is the right thing to do. Not only that, but the money raised will go straight back into public transport in outer London, making a virtuous circle of fewer cars and better buses.

“I love this story because it demonstrates political courage alongside determined activism. Opposition to such schemes are highest the moment before they’re implemented. If Ken Livingstone’s original congestion charge had been put to a referendum, it would have been defeated. Just a year later, it had majority public support.

“Once people feel the benefits, traffic reduction schemes are popular and people want to keep them. The ULEZ expansion will clean our air, protect our climate and make London a better place to live. And if we can do it here, we can do it anywhere.”

5. Global renewable power capacity is set to double over the next five years

As the director of Project Drawdown's Drawdown Lift program, Kristen P. Patterson deepens collective understanding of the connections between climate change solutions and poverty alleviation, particularly in countries in Africa and South Asia.

She is inspired by the rapid global expansion of renewable energy.

The news that global renewable power capacity growth is set to double over the next five years buoyed my spirits.

“The origins of the recent push to secure global energy supplies are tragic (Russia’s invasion of Ukraine). Yet, this news gave me hope: expanding renewable energy rapidly in both high and low and middle income countries is essential for a more just and equitable world. 568 million people - 75 per cent of whom live in sub-Saharan Africa - still do not yet have access to electricity; that must change to eradicate extreme poverty and advance the right to sustainable development for all.

“And, those of us in high income countries have a responsibility to drastically cut our own emissions. My household installed solar panels in October; it feels good to play a small part in the renewable energy transition.”

Sophie Marjanac, a lawyer for environmental law charity ClientEarth, is celebrating a recent ruling that Australia’s climate inaction was a violation of Torres Strait islanders’ right to family life and culture.

The first of its kind legal action asked Australia to compensate the claimants for the harm suffered and secure their communities’ safe existence.

“The legal win of eight Torres Strait Island claimants was another ray of hope in a year further punctuated by the realities of the climate crisis.

“The complaint is yet more proof that governments can and will be held accountable when they fail to protect people from the devastating impacts of catastrophic climate change. It has opened the door to further legal actions by people on the climate frontline, and it will strengthen the hands of communities fighting to be compensated for loss and damage suffered.”

"What gave me hope for climate action in 2022 is a new initiative called HERO, which aims to provide a basic income for 10,000 climate activists in the next five years. HERO is a subscription-based platform where people can support activist groups around the world working on pressing policy issues, and be part of their journey.

“I'm co-leading the UK Climate Justice Circle, which is focusing on ending new fossil fuels in the UK for good. Climate activism is the most effective way of accelerating policy change, and compensating campaigners for the work will be an absolute game changer.

“The Stanford Social Innovation review found that funding climate movements can be 100 times more cost-effective in reducing CO2 emissions compared to buying carbon offsets. Providing financial stability for activists is an exciting climate solution which is gaining momentum. People can subscribe to a HERO circle via the app."

2. Decarbonisation has become an economic and security priority

Elisabeth Cremona is an energy and climate data analyst at Ember, a think tank aiming to shift the world from coal to clean electricity. She says 2022 brought fresh hope for decarbonisation.

“This year was a key turning point in the way governments look at decarbonisation - no longer only as a climate goal, but an economic and security priority. This is reflected in the increased ambition we saw from many EU countries in response to the energy crisis. Our research shows this translates into almost an additional 10 per cent renewable power by 2030, and positive impacts from this accelerated action are already being felt.

“We also saw the G7 economies commit to achieving a clean power system by 2035, in recognition of this as a critical milestone for putting the world on track for 1.5C.”

1. The US agreed to loss and damage funding and a fossil fuel phaseout

Ben Goloff is a senior climate campaigner at the Center for Biological Diversity, a nonprofit known for its work protecting endangered species through legal action, petitions and grassroots activism. He's optimistic about progress in the United States on two fronts.

Leaders finally agreed to a United Nations loss and damage fund for historically polluting countries to pay their fair share for climate harms to the Global South.

“After unrelenting pressure, communities and activists won two breakthroughs toward accountability from the United States for decades of climate damages. First, US leaders finally agreed to a United Nations loss and damage fund for historically polluting countries to pay their fair share for climate harms to the Global South. Proof will be in the pudding as to how that’s implemented, but it’s a huge victory for people of the global majority.

“And second, in recognition that fossil fuels are the root drivers of the climate emergency, US officials for the first time joined a growing chorus of dozens of countries calling for explicit commitments at COP27 to phase down oil, gas and coal.

“We’ll be working this year to demand they walk their talk, reject new fossil fuel projects back home and safeguard against Big Oil-endorsed false solutions like carbon capture and offsets.”