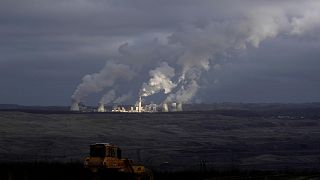 Smoke rises from chimneys of Turow power plant located by the Turow lignite coal mine near the town of Bogatynia, Poland.   -   Copyright  Petr David Josek/Copyright 2022 The Associated Press. All rights reserved
By Rosie Frost  •  Updated: 18/03/2022

In an attempt to break Europe’s reliance on Russian fossil fuels, there have been growing calls to backtrack on green targets.

Germany and Italy have said they may have to reactivate old coal power plants and natural gas is being imported from all over the world. “The faster EU policymakers seek to move away from Russian gas supplies,” the International Energy Agency said in a recent report, “ the greater the potential implication in terms of economic costs and near term emissions.”

Pledges at the end of the COP26 climate summit saw 23 countries make new commitments to phase out coal power - including many in Europe. A winter overshadowed by a growing energy crisis, however, means the world burned more coal than ever in order to keep the lights on.

In the wake of the invasion of Ukraine, governments are now rethinking their timelines to phase out fossil fuels, as they scramble to cope with the gap left by Russian oil and gas.

“It is also music to the ears of the pro-fossil fuel lobby, who see this as an opportunity to push back against the pan-European push to accelerate the energy transition,” says Santiago Lefebvre, founder and CEO of international environment network ChangeNOW.

“It’s precisely because we are not making this transition quickly enough that we risk continued and sustained shocks to our economic system from crisis and disasters.”

He says the only way to divorce from Russian fossil fuels is to divorce ourselves from fossil fuels altogether. To do this Lefebvre believes we need to double down on green investments, driving Europe even faster towards renewable energy.

Lining the pockets of those most responsible for the climate crisis

Others have pointed out that turning back to fossil fuels to solve the energy crisis lines the pockets of those companies most responsible for the climate crisis.

Greenpeace EU climate and energy campaigner Silvia Pastorelli says it is them who have been the people “funnelling money to Putin’s war machine.”

European governments must tax these ill-gotten gains and invest all of it in moving Europe away from fossil fuels for good.

“European governments must tax these ill-gotten gains and invest all of it in moving Europe away from fossil fuels for good,” Pastorelli adds.

Greenpeace is calling for a windfall tax on oil, gas and coal companies that profited from the energy crisis. With this, they say, the EU would be able to pay for the rapid transition that is needed to wean the bloc off Russian fossil fuels.

The European Commission's REPowerEU plan also involves developing its supplies of natural gas. Environmentalists worry that investing in this commits the EU to using high carbon energy for longer than it had planned.

Conolly believes measures including more capacity for renewables, heat pumps and insulation could help Europe survive next winter and beyond.

“This could be the beginnings of the radical change the EU urgently needs to end our dependence on fossil gas for good.”

Pastorelli agrees, adding that a “handbrake turn in Europe’s energy systems” is needed.

Insulating homes, building renewables at an unprecedented rate and decarbonising transport would "defund conflict, protect the vulnerable from energy poverty and steer us away from climate crisis."