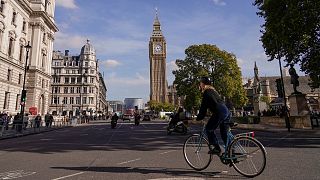 With traffic down and cycling on the rise, London is undergoing a transport transformation.   -   Copyright  AP Photo/Alberto Pezzali
By Freya Graham  •  Updated: 17/12/2022

Ever driven in London? Then you’ve probably been stuck in a traffic jam in London, too.

The UK capital often finds itself ranked as one of the world’s most congested cities. Its higgedly piggedly streets don’t help traffic flow, and with an ever-growing population - 8.8 million at the last count, with 9.4 million projected by 2030 - pressure on the transport system is only going to increase.

Data from the Department for Transport, though, tells a slightly different story. In the last decade, traffic flow in London - that’s a measure of how many vehicles are in a city, and how far each vehicle is travelling - has dropped by 10 per cent.

In some areas, that figure is bigger: in Westminster, for instance, traffic flow has decreased by 28 per cent in the last ten years. In Camden, it has dropped by 21 per cent.

While the COVID-19 pandemic has skewed data from the past two years - giving an incomplete picture - there are still signs that the decrease is more than just a lockdown trend.

In 2022, traffic on London’s busiest routes is still down six per cent compared to before the pandemic. London is undergoing a gradual transformation.

Ollie More, Senior Policy Officer at walking and cycling charity Sustrans, calls the latest stats “really encouraging”. According to More, one of the key factors behind the slow shift away from driving is London’s trio of road-pricing initiatives.

The first scheme - the Congestion Charge - was introduced way back in 2003, following in the footsteps of Singapore. The idea is simple: most vehicles - with exemptions for electric cars - have to pay a £15 fee (€17) to drive in the city centre at peak times. More says the scheme has been a “success”.

Next came the Low Emission Zone in 2008, which applies to large commercial vehicles like delivery lorries. Finally, in 2019, the Ultra Low Emission Zone (the ‘ULEZ’) was introduced to tackle air pollution, which charges cars that don’t meet pollution guidelines to drive in certain parts of the city.

Next year, the ULEZ will expand across the entirety of Greater London. The concept of ‘low emission’ zones has been gaining popularity across Europe - there’s now 320 low emission zones across the continent.

Silviya Barrett, director of policy and research at the Campaign for Better Transport, says that the ULEZ may have played a role in reducing car usage in the city.

“TfL estimates that six months after the expansion into inner London there were 21,000 fewer vehicles seen in the zone on an average day, a reduction of two per cent, and that traffic flows were around two per cent lower than the weeks before the expansion launched,” she says.

Cycling has soared in London

If driving is on the decline, how are people travelling? One mode of transport has rocketed in London in the last ten years: cycling.

Between 2011 and 2021, bike traffic in London increased by 66 per cent. Investment in new cycling infrastructure has made cycling in the city more accessible, with the number of people living within 400 metres of a high-quality cycle route almost doubling since 2019.

“They've certainly made people feel more comfortable, safer,” says More. “It's made it easier for people, they can see that there's a route which is designed for them, [and] that gives them confidence as well.”

London’s cycle hire scheme, which was introduced in 2012, is also encouraging cycling. In 2021, 10,941,264 Santander bikes were hired, and usage of the scheme has increased by 53 per cent in the last decade. With 12,000 docked bicycles across the city, it’s the largest cycle hire scheme in Europe.

What’s next for London’s transport revolution?

More thinks there’s still progress to be made. “One in five people live within a close distance of that cycle network,” he says. But, turning it around, “if only one in five people lived within a close distance of a safe car driving road - people would be up in arms,” he says. “So there's a massive amount of investment that needs to go into the cycle network.”

Barrett says that there needs to be changes to the road-pricing initiatives, too. “Next year is the 20th anniversary of the original congestion charge and a London pay-as-you-drive scheme is the next logical step for the capital so that people who drive less, pay less,” she says.

According to Barrrett, changing transport in cities is a key part of tackling climate change. “In order to reach net zero in London by 2030, we need to see a reduction in vehicle kilometres of at least 27 per cent relative to 2018,” she says.

Which other European cities are leading the way?

Barrett adds that London can look to other cities for examples on how to make this transition.

“Antwerp, together with Vienna, Helsinki, Hannover and Milan are pioneering the use of digital multimodal mobility route planners to provide a digital list of transport modes for each given journey, often in combination with each other, to help people make door to door journeys that avoid using a car,” she says.

“The Germans and Austrians are also leading on public transport affordability with the Klimatiket and similar initiatives.”