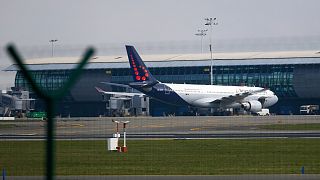 Belgium will impose new taxes on older, noisier planes as well as private jets and short haul flights, according to a government statement.

The move aims to reduce noise and air pollution.

Currently, aircraft using Brussels Airport have to pay a tax determined by the noise level generated at take-off and landing. Until now, small planes such as private jets have been exempt.

As of 1 April 2023, taxes will not only be dependent on noise, but on air pollution, greenhouse gas emissions and the destination of the flight.

Duties will increase for flights shorter than 500 km (310 miles).

"The noise pollution experienced by residents near Brussels National Airport, whether they live in Flanders, Brussels or Wallonia, cannot remain as it is," Georges Gilkinet, deputy prime minister and minister in charge of transport, said in a statement.

Business aviation represents 12 per cent of all air traffic in Belgium, according to the European Business Aviation Association.

While there is no regulation yet at EU level to tax corporate aircraft over greenhouse gas emissions, France has pushed the idea since the summer.

How else is Belgium targeting short haul flights?

In April 2022, Belgium introduced a new €2 tax per passenger on EU routes and a new boarding tax to encourage alternatives to short haul flights.

For flights under 500 km from Brussels airport, this tax rises to €10 per passenger. For destinations further afield, it is between €2 and €4. Transit and transfer passengers are exempt from the charge.

Which other countries are cracking down on short haul flights?

The decision comes hot on the heels of the news that France will be banning short haul domestic flights.

The move will abolish flights between cities that are connected by a train journey of less than 2.5 hours.

France is also combating the use of private jets for short journeys, aiming to make transport greener and fairer for the population.