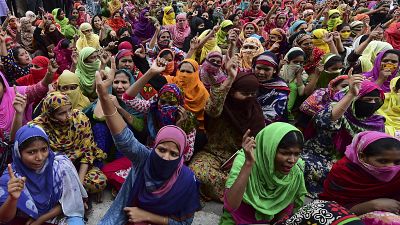 How many times have you heard someone say, ‘I’d love to buy sustainable clothing but I just can’t afford it’?

We’re more likely to buy five pieces of fast fashion over the course of a year, at €20 each. That’s a total of €100 - or the same price as one dress from an environmentally sound brand that pays its workers a fair wage.

So the question is, why do we continue to buy endless polyester (plastic) items that will stick around to pollute the planet long after we throw them away, all while garment workers are being exploited and grossly underpaid?

Back in 2016, the co-founder of Eco-Age launched the extremely popular #30Wears Challenge to encourage people to only purchase something they know they will wear 30 times.

The co-authors and experts in their field are Veronica Bates Kassatly and Dorothée Baumann-Pauly, who are behind ‘The Great Greenwashing Machine’. The report calls out misleading metrics and failures to address the real problems at the heart of the industry.

Top of the agenda is the abuse of basic human rights.

I spoke to the authors to find out exactly why they published the report and how they hope it can change the fashion industry for the better.

Fast fashion makes us addicted to the act of buying

Firth tells me that when she was in her twenties, if an item of clothing was too expensive, she would save and come back to it in three or four months.

“That item would still be there,” she explains.

“What shops like Zara did was they lowered the prices and produced tiny quantities of lots of styles. So when you went in and thought, ‘I'm going to think about it and come back’, you couldn’t because a week later - it would be gone from their stock.

“They addicted us to the act of buying then and there.”

As one of the largest fast fashion giants on the planet, making billions in profit every year, Zara succeeds due to an inherently damaging business model that prioritises new arrivals and has a huge volume of deadstock.

So when someone says they just can’t afford to shop sustainably, Firth’s response is to set them a challenge.

“I want to do an experiment with you. Let's start in January and end in December, and I want to know how much you've spent on rubbish. I promise you it is way more than I spent in a year.”

She adds with a laugh, “These are not multi-billion companies because of poor people who can’t afford to buy their clothes!”

While it’s all well and good to avoid fast fashion, you shouldn’t fall into the trap of buying second-hand items that you still only wear once or twice either.

It’s preferable to buying new of course but, as Baumann-Pauly puts it,

‘The Great Greenwashing Machine’ was published to draw attention to fast fashion’s problems and to try and change the way we think about clothes consumption.

The issues are endless. From the human rights abuse in countries in the Global South, to fossil fuel-based materials that never decompose. On top of it all, the sustainability metrics for brands who are trying to make a difference are, almost exclusively, opaque and untrustworthy.

We need to think twice about sustainable materials

One of the most overlooked issues in the industry is human rights and how they intersect with the materials our clothes are made from.

“If you look at the business model of fast fashion - it is predicated on exploitation. Without exploiting labour, you would never be able to produce those volumes and those costs,” says Firth.

“We’re looking at it the wrong way because we're trying to correct an environmental impact without even considering the social.”

Bates Kassatly adds that you can’t claim certain materials are ‘more sustainable’ than others without first doing your research.

“People just don't seem to understand that if you say, ‘don't buy this fiber because it's bad’, you are impacting somebody's livelihood. You're impacting some of the poorest people on the planet.”

Cotton is a perfect example that people take for granted, she explains.

“It is often the only cash crop that people can readily grow because it is durable - it lasts. If you're in Benin or Burkina Faso and want to grow something and then ship it somewhere, it’s got to last and not to perish before it gets there. So cotton works better than vegetables, if you’re a farmer.”

Cotton production provides income for more than 250 million people worldwide and employs almost 7 per cent of all labour in developing countries. And not only does buying cotton help to sustain someone’s livelihood, it’s also a natural fiber.

Granted, conventional cotton requires water and often pesticides to produce, but it’s nowhere near as toxic as synthetically produced polyester which derives from petroleum.

So before you stop buying conventional cotton because you’ve heard it's environmentally damaging, the experts say you need to think twice about what you’re doing to the producers.

“And in the same way, when you start saying to someone, ‘this is a sustainable dress because it's made with a certain material’, but it was made by someone who was not paid a living wage - that is not sustainable. It’s completely misleading,” says Baumann-Pauly.

Why are sustainability metrics ‘completely unsubstantiated’?

Surely there’s a system out there that can rank all these different materials, so we know which ones to stay away from?

“The Higg measures different environmental factors like global warming, eutrophication and water use, but it’s a privately owned database. You can’t see how the numbers were calculated,” she says.

Firth adds that two major lobbies are involved in managing the index.

“One is the fast fashion lobby, so the business interest, and two is the oil companies, producing fossil fuelled polyester.”

She says that, according to the Changing Markets report from last year, 70 per cent of the industry relies on synthetic fibers. It’s no coincidence then, that, going by the Higg Index, these materials come out as more environmentally friendly than natural fibers like cotton.

There is a real war on natural fibers, in favour of big business and big oil. Without synthetics, fast fashion wouldn't exist.

“There is a real war on natural fibers, in favour of big business and big oil. Without synthetics, fast fashion wouldn't exist.”

“There's no data that is independent, when it comes to sustainability claims. So it can be manipulated to look like whatever you want it to be.”

What needs to be done to fix fashion’s systemic issues?

The report’s authors agree that we need a common definition and common metrics in order to combat the problem with materials.

“We need to act like investigative journalists, to unpick and untangle these claims - we need to go back to the source and find out that, most of the time, the source doesn't even exist,” Firth says.

What the report clearly highlights is that the environmental impact of fashion is not being correctly assessed. This is mainly because the impacts are calculated per kilo, when what really matters is 'impact per wear'.

First and foremost, the experts are calling on policymakers to implement a traceable, shared metrics system which brands are held accountable to.

Experts are calling on policymakers to implement a traceable, shared metrics system which brands are held accountable to.

Just this month, the EU announced plans for new laws which would recognise the link between fast fashion and fossil fuels. At the centre is an EU-wide Extended Producer Responsibility scheme, which will make brands like Boohoo, H&M and Zara, pay a waste fee for every item they sell.

There are also some positive mentions of tackling durability and microplastics in these proposals.

But the nitty gritty details won't emerge until 2023, which is too late, according to the co-authors of the report. Crucially the issue of sustainability metrics has still not yet been addressed.

“Misinformation is rife,” concludes Baumann-Pauly. “We don’t expect consumers to do a detailed analysis on every item they buy, that's why we wrote the report.

“Someone needs to have a rigorous look behind the façade of the fashion industry.”