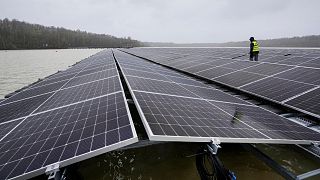 Solar panels are installed at a floating photovoltaic plant on a lake in Haltern.   -   Copyright  AP Photo/Martin Meissner, File
By Rosie Frost  •  Updated: 20/12/2022

Solar power in Europe has soared by almost 50 per cent in 2022, according to a new report from industry group SolarPower Europe.

It reveals that the EU installed a record-breaking 41.4 GW of solar this year - enough to power the equivalent of 12.4 million homes. That is a 47 per cent increase from the 28.1 GW installed in 2021.

In one year, the bloc’s capacity to generate power from this renewable source has increased by 25 per cent.

“The numbers are clear. Solar is offering a lifeline amid energy and climate crises,” says Walburga Hemetsberger, CEO of SolarPower Europe.

“No other energy source is growing as quickly or reliably as solar.”

And the growth of solar shows no signs of slowing down. The International Energy Agency says the EU needs to install around 60 GW of solar power in 2023 to compensate for shortfalls in Russian gas.

With rapid and targeted support, SolarPower Europe believes that Europe could fill this gap.

Which EU countries are installing the most solar power?

There are 10 EU countries that are now adding at least 1 GW of solar power a year.

Germany installed more solar than any other country in the bloc, adding almost 8 GW in 2022. The country has held the number one spot since the early 2000s but it saw a big boost in the last year as high energy prices made the renewable energy source a cost-effective solution.

It was closely followed by Spain (7.5 GW) which saw a 55 per cent increase in solar installation in 2022. This was in part thanks to the growth in rooftop solar panels and the energy crisis.

Portugal came in just behind France, its first time in the top 10, with an incredible 251 per cent growth in the amount of solar installed compared to 2021.

The top of the league table was rounded out with Denmark, Greece and Sweden.

How can the EU install even more solar power in 2023?

The REPowerEU plan aims to increase renewables to 45 per cent of the bloc's energy supply by 2030. The report highlights five key ways the EU can ride the rapidly growing solar wave and reach this target.

It says more qualified technicians are needed to install panels and connect them to the electricity grid. Training more people to do this job could increase the rate at which solar power grows in the EU.

The stability of the electricity grid and European manufacturing of solar panels also need to be improved to get rid of the roadblocks preventing growth.

“We need more electricians and stable electricity market regulation. A solar-powered Europe can only be based on smoother administrative processes, speedier grid connections, and resilient supply chains.”

Fortunately, the industry group says, Europe is already hearing these calls from the solar sector and has many of these recommendations on its agenda for 2023.