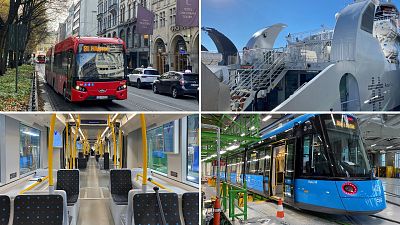 Oslo is leading the way for sustainable transport with electrified ferries and e-buses.   -   Copyright  REUTERS/Victoria Klesty   -
By Angela Symons  with Reuters  •  Updated: 14/10/2022

Oslo is on course to become the first capital city in the world with an all-electric public transport system.

Norway's capital hopes to reach this goal by the end of 2023 as part of its aim to become the world's first wholly emissions-free city by 2030.

The transport push entails replacing the city's diesel-fuelled buses with 450 electric ones. It is hoped the 500 million crown (€48 million) programme will save the city money over the long term.

"The maintenance is cheaper, it's also cheaper for the operators of the electric buses," says Sirin Stav, Oslo's Vice-Mayor responsible for environment and transport. "All in all, this is a win-win situation."

In the city's last tender, e-buses were 5 per cent cheaper than diesel equivalents.

The goal of the project is to cut emissions, reduce noise and improve air quality in the city.

Oslo is leading the way for sustainable transport

Oslo, a city of 700,000, has already electrified most of the ferries that ply the fjord on which it is located. It also has an extensive tram and bike lane network

The city's e-bus programme comes amid a global push by major cities worldwide to try to cut their air pollution.

As governments and activists prepare for next month's COP27 UN climate summit in Egypt, Stav encourages other cities to follow Oslo's example.

"However, it is important that Oslo going forward makes sure there is transparency in how much emissions are associated with the production of these ferries and vehicles," she adds.

Norway on alert after drone sightings near key infrastructure