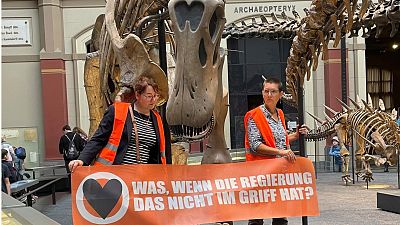 Activists from Germany's Uprising of the Last Generation hold a sign reading, "What if the government doesn't have it under control?"   -   Copyright  Paul Zinken/dpa via AP   -
By Euronews Green  with AP  •  Updated: 31/10/2022

Two environmental activists glued themselves to a dinosaur display at Berlin's Natural History Museum on Sunday.

The protesters called attention to what they say is the German government's failure to properly address the threat of climate change.

The women used superglue to attach themselves to poles holding up the skeleton of a large four-legged dinosaur that lived tens of millions of years ago.

Why did German activists glue themselves to a dinosaur display?

Fellow activist Solvig Schinkoethe, 42, said that as a mother of four she feared the consequences of the climate crisis.

"This peaceful resistance is the means we have chosen to protect our children from the government's deadly ignorance," she said.

Their sign reads, "What if the government doesn't have it under control?"

Which group are the German activists part of?

The activists are part of the group Uprising of the Last Generation, which has staged numerous demonstrations in recent months, including blocking streets and throwing mashed potatoes at a Claude Monet painting.

The protest follows a string of similar stunts by UK activist groups. In September, members of Extinction Rebellion glued themselves to a chair in the UK parliament. Meanwhile, Just Stop Oil activists glued themselves to paintings in art galleries across the UK.