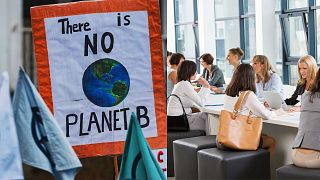 Career services at the University of Bedfordshire, University of the Arts London and Wrexham Glyndwr University have promised to end all relationships with oil, gas, and mining recruiters.

The ban - a product of a passionate student-led campaign - comes three months after a similar move by Birkbeck, University of London.

Campaign sponsor charity People & Planet described it as a victory for climate campaigners against big polluters.

“It is vital that our universities show with actions, not words that they are taking the side of climate justice, and not of the industries driving us deeper into a climate crisis that is harming the least responsible first and worst,” said J Clarke, the charity’s co-director of climate campaigns.

Why is fossil fuel recruitment a problem on university campuses?

But as the climate crisis bites around the world, many job seekers are shunning these lucrative offers in favour of more environmentally friendly careers.

In a global survey conducted in 2020, well over half of 4,300 millennial respondents said that they would avoid working in oil and gas due to its ‘negative’ image.

A 2017 report into the industry’s recruitment strategies warned that “the talent pipeline has ruptured” as younger workers look to other job providers.

And in May this year, UN secretary general António Guterres told new university leavers not to work for fossil fuel polluters.

“You will have plenty of opportunities to choose from. My message to you is simple: don’t work for climate wreckers,” he said.

“Use your talents to drive us towards a renewable future.”

What is behind the movement to ban fossil fuels from campuses?

The movement to ban fossil fuel recruiters from university campuses has been growing for years.

In 2019, University of Sheffield students booted BP and ExxonMobil out of a careers fair with a noisy sit-in. The same year, University of Oxford students blockaded a hotel where mining giant Glencore was hosting a graduate recruitment event.

An industry-specific ban is not unprecedented. About 20 per cent of UK university careers services already bar recruitment from the tobacco industry, adult/sex industry, and gambling industry.

Student-led campaigns have also pressured 100 UK universities to divest from fossil fuels - meaning endowments worth more than £17.6bn (€20.5 billion) are inaccessible to oil and gas producers.