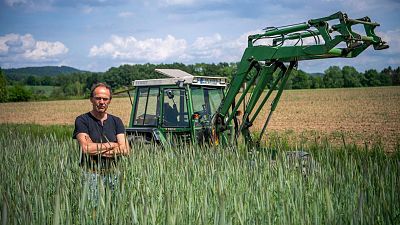 Environmentalists claimed a small legal victory on Friday after a court in Germany said it would continue hearing a case brought by a farmer seeking to force automaker Volkswagen to end the sale of combustion engine vehicles.

Ulf Allhoff-Cramer says drier soil and heavier rains due to climate change are harming his fields, cattle and commercial forests. He argues that Volkswagen (VW) is partly to blame for this, as the mass production of vehicles running on gasoline contributes significantly to greenhouse gas emissions in the atmosphere.

During the first hearing in May, a regional court in the western German town of Detmold appeared to cast doubt on those claims, with judges asking the plaintiff to provide further details to back up their legal arguments.

On Friday, the court again asked for further details and set a new hearing for 3 February 2023.

"To me, this is a first success because we weren't dismissed here and don't have to go to appeals," said Roda Verheyen, the plaintiff's lawyer.

Is this the first time a car manufacturer has been held responsible for emissions?

Environmental group Greenpeace, which supports the case, said it's the first time a court will consider whether a car manufacturer can be forced to change its business practices to prevent climate-related harm to a plaintiff's health and property.

The group accused VW of relying on the arguments of climate change sceptics to avoid bringing forward its current deadline for ending the sale of combustion engine vehicles from 2040.

The automaker has objected to the 62-year-old farmer's claim that it can be directly linked to any climate-related damages he has suffered.

VW also pointed to its massive effort to shift production to electric vehicles in the coming years and said it was confident that judges in Detmold would eventually dismiss the case.

Allhoff-Cramer said the court's decision to wait five months before holding another hearing was disappointing.

"The climate crisis is escalating and we're running out of time," he said.