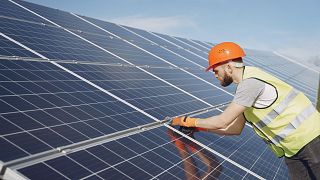 Decarbonising the energy system is a crucial way to reduce emissions and stem climate change.

But it’s also going to save us a lot of money.

According to Oxford University researchers, ending fossil fuel use by 2050 will save the world at least $12 trillion (€11.3 trillion).

The study disproves the fallacy that going green is economically difficult, says Professor Doyne Farmer, who led the study.

“There is a pervasive misconception that switching to clean, green energy will be painful, costly and mean sacrifices for us all - but that’s just wrong,” he said.

By accelerating this transition, the costs will come down more quickly, he added.

How much cheaper are renewables?

Those who profit from fossil fuels often claim that the clean energy transition will cost a lot of money.

But the report’s findings appear to disprove this.

Researchers used historic price data for renewables to model what they’re likely to look like in future.

On average, the costs of wind and solar power have dropped by around 10 per cent a year.

This means prices drop sharply. In the 1950s, solar power was as much as 10,000 times more expensive than coal and gas - but it’s now cheaper (though the upfront costs are still more expensive).

By using ‘probalistic data,’ the researchers estimated that the prices will continue to fall, as investment makes the technologies cheaper.

Meanwhile the price of fossil fuels - when adjusted for inflation - has not dropped significantly over the past 140 years. Any major changes have been due to geopolitical events like the war in Ukraine.

Overall, this means renewables will be cheaper than fossil fuels.

Dr Rupert Way, one of the study's lead authors, says that investors need to turn to green energy.

“Past models, predicting high costs for transitioning to zero carbon energy have deterred companies from investing and made governments nervous about setting policies that will accelerate the energy transition and cut reliance on fossil fuels,' he says.

“But clean energy costs have fallen sharply over the last decade, much faster than those models expected.”