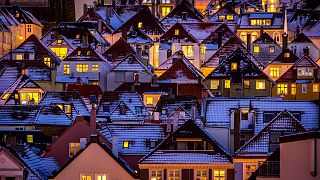 As cold weather grips Europe, many people are deeply concerned about their heating bills.

Energy prices have soared following Russia’s invasion of Ukraine, and the European Commission has called on countries to prioritise insulating buildings this winter.

But not all citizens are feeling the cold - or the pinch of energy bills - the same. Recent research shows that home temperature losses vary considerably across Europe.

These differences are down to the quality of building insulation, as outside temperatures were standardised at 0 °C for all countries analysed.

Which country has the worst insulation?

Home temperature losses are highest in the UK, which has the oldest housing stock: 37 per cent of homes in the UK were built before 1946.

Which country has the best insulation?

Norway with 0.9 °C and Germany with 1 °C are the countries with the lowest home temperature losses.

This means that UK homes are losing heat three times faster than houses in Norway and Germany.

Sweden, Denmark, and Austria all have average home temperature loss of 1.2 °C. In Italy, this value is 1.5 °C.

Energy costs are more than double for old homes

How old a home is has a big bearing on its heat loss - as well as a range of other energy efficiency measures.

In the UK, research by the Office of National Statistics - based on Energy Performance Certificates - shows that energy costs for older homes are more than double those of newer ones.

Climate campaign group Insulate Britain isn’t the only one calling for Britain to be insulated.

Climate campaign group Insulate Britain isn’t the only one calling for Britain to be insulated. The Royal Institute of British Architects (RIBA) has argued for mass insulation of England’s interwar suburbs.

“A very large proportion of these have not had changes made to the walls since construction, meaning that they do not have any insulation,” a RIBA report states. It was calculated that proper insulation, double- or triple-glazing, and gas boiler replacement in 3.3 million interwar homes could cut the country’s carbon emissions by four per cent.

Most homes were built before the first thermal regulations

According to the EU Building Stock Observatory, most residential buildings in the EU were built before the first thermal standards were introduced in the 1970s. These energy efficiency measures were brought in after the oil crises caused by war and political turmoil in the Middle East.

Which European countries have the oldest homes?

There are only six countries in which less than one-third of homes were constructed before 1970. These are Cyprus, Greece, Spain, Ireland, Malta, and Finland.

Which European countries have the youngest homes?

REPowerEU Plan: What does the EU suggest?

Improving the energy efficiency of housing stock has become increasingly critical in many countries in light of rocketing energy prices.

“The most immediate savings can be delivered through better insulating high temperature equipment,” it says. Why? Because these measures have extremely short payback times.

The Commission is therefore urging member states to make full use of supportive measures such as reduced VAT rates for high-efficiency heating systems and insulation in buildings.

Review of the Year: The impact of Russia’s invasion of Ukraine