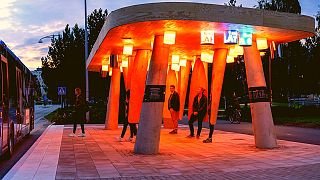 A smart Arctic station is one solution pioneered through the RUGGEDISED project.   -   Copyright  RISE Sweden
By Lottie Limb  •  Updated: 26/09/2022

The university town of Umeå, in northern Sweden, is almost completely dark in winter. Encouraging residents to take public transport on cold, gloomy mornings requires some persuasion, but the city is more insightful than most about the needs of the people living there.

After decades of applying a gendered lens to its travel surveys, the city knows that if everyone travelled like women, it would already have reached its sustainable transport goal for 2050.

“It started a big discussion in Umeå,” project manager Carina Aschan says of the Station of Being, which uses distinct sounds and coloured lights to announce incoming electric buses.

“It was meant to be an energy solution but it became a social solution too, and sparked a wider discussion about Umeå being innovative, and whether a city should do that.”

Dozens of smart solutions have been launched under an EU-funded project called RUGGEDISED, aiming to decarbonise three cities and inspire many more. As it draws to a close after six years, the question of what our cities can do for us, energy wise, has become more urgent than ever.

Here are some of the brightest findings from the ‘lighthouse’ cities of Umeå, Rotterdam and Glasgow.

What are smart cities?

Smart cities sound futuristic but are built on some simple ideas around digitising our transport, buildings and other infrastructure. One way of thinking about smart solutions is working better with what’s already there.

In Rotterdam’s Heart of South experimentation area, the warmth from sewage water (which reaches up to 19C) will be recouped via a heat exchanger and stored in the thermal grid. Close by, tubes have been laid underneath the pavement to extract its heat (the concrete hits 65C in summer). In winter, warm water instead of cold will be pumped through them to melt the icy walkway.

There’s nothing flashy about this innovation, hidden below ground and around the back of the city’s Ahoy convention centre.

But it’s about results, and Ahoy has been fossil free since 2019. A carpet of thousands of solar panels on its roof supply the colossal energy needed for huge light shows, like Eurovision 2021.

Rewiring Rotterdam into a smart city

The Netherlands’ second city was razed by German bombers during the second world war, so its eclectic architecture has relatively recent roots.

“We do have an advantage because we have quite spacious public space,” explains van den Berge, making it easier to weave smarter infrastructure below roads and into the fabric of the city.

“Rebuilding Rotterdam after World War Two, we had an empty inner city, it was all flattened and they built a district heating system” she says. “The ownership changed and the sources changed, but the system was already there, so that makes it easier to expand it.” Around 11 thousand homes are already connected.

Knowing more about the way energy flows through our cities also enables us to be more efficient in our use of it. Umeå’s most impactful solution has been better management of demand, says Aschan.

An intelligent set of sensors were installed in its university buildings, collecting data on human presence, temperature, light and CO2 levels. A smarter heating and cooling system followed which has achieved a 23 per cent drop in energy use during peak times across the campus.

The city’s university borders its hospital, and RUGGEDISED has sparked conversations between the two. Instead of building a new wing, the hospital realised it can use some of the empty university facilities at night. It may seem simple but using what is already there in a smarter way is what is needed in most cases.

Smarter ways to use energy at home

The main place that many city dwellers desperately need to save energy this winter is at home.

That’s not equally true across the continent. In Sweden, tenants have a right to a heated home and there’s no phrase for ‘fuel poverty’ (or warm banks). In the UK - despite Prime Minister Truss freezing bills at an average of €2,890 a year - 7 million households are still on course to spend more than 10 per cent of their income on fuel.

To alleviate the burden on some of its poorest residents, Glasgow City Council has partnered with Wheatley, Scotland’s biggest social housing group. Through RUGGEDISED, new devices have been installed on tenants’ electric storage heating systems, giving them greater control over the temperature in their flats.

People are using around 20 per cent less electricity as a result, explains Wheatley carbon reduction and sustainability manager Colin Reid.

“It allows us to interact with households, it offers them for the first time the ability to control heating in their own home when previously they were just the receivers,” he says.

“It’s a courtesy for people that they can see for themselves how their home is operating.”

“It’s part of the character of the city,” says Reid. “It’s got its issues and has a legacy of industrialisation, but on the whole Glasgow is a warm place. People want community with each other, so that’s a real asset whenever embarking on a just transition.”

Running through the heart of the city - along a stretch of George Street and Duke Street - is Glasgow’s flagship solution: it’s smart street.

Here the council has trialled a range of measures, including lighting triggered when people walk past, a new solar canopy on the car park roof to charge EVs plus power storage, and district heating.

When the world’s leaders descend on your city for COP, decision makers tend to take more notice, says Gavin Slater, head of sustainability at Glasgow City Council. Yet, “the city is a fundamentally better place” because of its participation in RUGGEDISED, he says.

Glasgow has made great progress towards its net-zero by 2030 goal, Slater revealed. Carbon emissions have already been slashed by 50 per cent since 2006.

Data is quickly transforming how we see our homes and streets, from an energy-saving point of view. Where there used to be one data point a year - someone coming to check your gas and electric - our homes are now a hive of numbers, notes Dr Marcel van Oosterhout from the Erasmus Centre for Data Analytics.

Public concern over how this data is used is, understandably, slowing its potential. The risk comes from how detailed a picture can fall into the wrong hands. Data about energy usage could be combined with addresses, giving a pretty clear indication of when people are on holiday.

But representatives from all three cities spoke in glowing terms about what ‘digital twins’ can do for sustainable planning. These are smart 3D models of the city that combine with real time data about how it’s functioning, explains Roland van der Heijden, programme manager for Digital City Rotterdam.

They enable residents to be brought into the planning process too. At the site of a new square, people can scan a QR code to create and judge designs, then use augmented reality to see how they will look.

Generic, scalable, maintainable data sources are key, adds van der Heijden. And it’s here that the private sector may have a big role to play. Google is drawing on huge data reserves to build up its environmental insights explorer (EIE) tool, totting up transport emissions, air quality and tree canopies.

Anna Williams, a solutions lead in the tech giant’s Geo team, insists that “helping cities lower their emissions is our north star.”

What are the limits on smartening cities?

“There’s no cookie cutter copy” to building smart cities, says Adriaan Slob, an expert at the Dutch research organisation TNO which has helped the cities with their sustainable transitions.

A major challenge is that these smart solutions have to be implemented in existing urban areas, with their own messy webs.

In the Heart of South, Katelien van den Berge’s team could not get their smart electric grid off the ground. Though there are all the elements of smart lighting, electric vehicles and charging points, the city didn’t get the experimental status it needed to connect them, and a key contract bid for by energy partner Eneco was granted elsewhere.

“There was no coordination between tendering on a city scale and implementing on a project level,” reflects van den Berge. And with no overall owner, there was noone to take responsibility for the grid’s success. No matter in a city as restless as Rotterdam; the team are taking their learnings to a number of other big urban development areas.

Where ambition has overreached itself, RUGGEDISED still provides some striking blueprints. But it’s clear that smarter connectivity is needed at a higher, legislative level too.

As for the energy crisis overarching citizen’s lives - in Glasgow and Rotterdam at least - van den Berge believes “there can only be a way up. I think this winter will be the bottom, and then we will start working on how we are going to tackle it.”