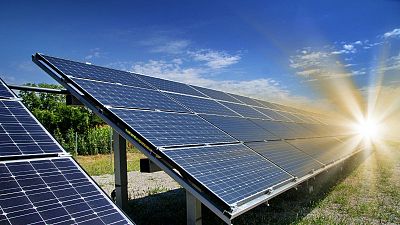 Solar power accounted for 12.2 per cent of the European Union’s electricity generated this summer - the highest share on record, according to a new report.

This power would have cost as much as €29 billion had it come from natural-gas burning plants, according to analysts from energy think tank Ember.

Europe has seen power costs soar over the past months, fuelled by Russia’s war in Ukraine.

But things could have been even worse if not for the record share of solar power generated, according to the new report published by Ember on Thursday.

According to Ember’s analysts, solar generation in the EU hit 99.4 terawatt hours this summer, a 28 per cent increase from the 77.7 terawatt hours last summer.

The EU generated 12.2 per cent of its electricity from solar between May and August this year, up from 9 per cent in the same period last year.

The EU would have had to buy another 20 bcm (billion cubic metres) of fossil gas this summer if not for the record share of solar power generated, says the think tank.

Based on the daily gas prices for May to August, it calculates that this equates to €29 billion in gas costs.

What are the top solar-producing countries in the EU?

Within the European Union, eighteen countries saw record shares of energy generated by solar power this summer, according to Ember.

Ten member states generated over a tenth of their electricity from solar panels.

The highest shares were seen in the Netherlands, with 23 per cent of its electricity generated by solar, followed by Germany (19 per cent) and Spain (17 per cent).

“As Europe is rocked by the gas crisis, solar energy brings some much-needed relief,” says Paweł Czyżak, a senior analyst at Ember.

“Investments in solar capacity have paid off. Every terawatt hour of solar electricity helped reduce our gas consumption, saving billions for European citizens.”

Solar’s 12.2 per cent share of the electricity pie exceeded the share of wind (11.7 per cent) and hydro (11 per cent) in the EU’s power mix this summer.

However this still puts it four percentage points shy of coal’s 16.5 per cent share.

To tackle the energy crisis, the European Commission’s president Ursula von der Leyen has revealed a series of proposals to curb soaring prices.

These include an EU-wide plan to reduce electricity consumption, a price cap on the excess revenues made by renewables and nuclear energy, a solidarity mechanism to capture the "massive" and "unexpected" profits reaped by fossil fuel companies, and a state aid programme to inject extra liquidity into struggling utility businesses.

These proposals are expected to be considered by energy ministers from EU countries, who will meet on 9 September to discuss how to ease the burden of soaring energy prices.

Could immunity boosting foods also be good for the planet?

Dutch city cracks down on ads aimed at meat eaters

What does new UK PM Liz Truss plan to do for the climate?