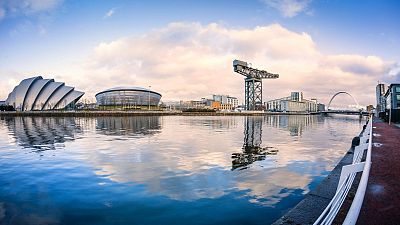 It’s hard to keep track of the calls for action coming out of Glasgow this week. But there’s no doubt that the most radical are not coming from the official COP26 venue, but the side events springing up around the city.

At one event organised by the COP26 Coalition on Sunday, environmentalists made the case for ‘ecocide’ to be a crime recognised in international law.

Lawyers and activists discussed the legal power to protect the natural world at the Glasgow Film Theatre, where minutes before the UN was found ‘guilty’ of failing to act on climate change by a People’s Tribunal.

Paul Powlesland, barrister and founder of Lawyers for Nature, described the way the law moved from enshrining human rights in the twentieth century to protecting “fictional entities” like registered companies this century, completely ignoring non-human lives.

“You could create a company for £12 (€14) in this country and it would have more rights than a 100 year old yew tree or the River Clyde,” which flows through Glasgow, he said.

Ecocide can literally be translated as “home-kill”, making clear its violence and absurdity. It refers to the destruction humans knowingly do to the environment, from deforestation to ocean plastic pollution.

A legal definition was written for the first time in June 2021, by a panel of top lawyers assembled by the global NGO Stop Ecocide Foundation (SEF). “Ecocide,” they agreed, “means unlawful or wanton acts committed with knowledge that there is a substantial likelihood of severe and either widespread or long-term damage to the environment being caused by those acts.”

"Ecocide means unlawful or wanton acts committed with knowledge that there is a substantial likelihood of severe and either widespread or long-term damage to the environment being caused by those acts.”

Words matter, and these ones are particularly important - as campaigners hope the definition could be used to prosecute offenders at the International Criminal Court (ICC), where genocide is tried.

Veteran Greenpeace activist and Spanish campaign manager at Stop Ecocide International (SEF’s campaign) Maite Mompo dissected the Western wording of nature. “We call nature ‘natural resources’ and that is terrible,” she said, “treating nature like an object and nature is not an object - nature is a treasure, nature is Mother Earth.

“So it is so important that we change our vocabulary.”

Setting the concept of ecocide within a “broader ecosystem” of the law, Powlesland looked at the “bizarre way” rights developed following the Universal Declaration of Human Rights in 1948.

He pointed out that you could register a company online with Company’s House in the UK for just £12, in a matter of minutes. The corporation would then have a ‘legal personality’, able to sue and be sued.

Which is more than can currently be said for Britain’s rivers. Raw sewage was dumped into English water bodies more than 400,000 times last year, for a total of around 3.1 million hours.

“Law is just a way to express human relations,” said Powlesland, who lives in a boat on the Thames in London. “And at the moment the way we relate to nature is one of property and ownership, but we can all begin to shift that.”

He urged listeners to get acquainted with their local river, learn to respect its rights - such as the right to be free from pollution and the right to host biodiversity - and then enact and protect them.