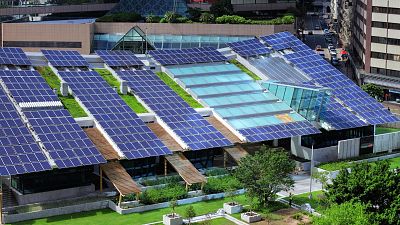 As solar panels become an ever more popular source of energy and heat, they aren’t just for rooftops anymore.

Particularly in urban areas where space is at a premium, placing solar panels on facades or other more visible parts of buildings is a necessity.

But their standard monochrome colour scheme leaves designers with fewer options to make buildings attractive. Some architects have even described solar panels as ugly or an eyesore, saying their appearance is an obstacle when integrating them into projects.

The problem often comes when trying to sell or rent a property where looks really matter.

Now researchers from the American Chemical Society have created solar panels that can take on a whole range of colours while producing energy just as efficiently as traditional ones.

Items appear a particular colour because they reflect that wavelength of light back instead of absorbing it. So if solar panels are to absorb as much light as possible, they need to be a deep black colour.

Other attempts to make the panels more vibrant have resulted in less power being produced, higher costs or even an undesirable iridescence.

So researchers in China - Tao Ma, Ruzhu Wang, and colleagues - set out to find an inexpensive way of colouring solar panels without reducing the power they produce.

The team sprayed the surface of the panels with a thin layer of something called photonic glass. It is made of microscopic spheres of zinc sulphide that allow most of the light to pass through.

Some light, however, is reflected back depending on the size of these spheres.

Using this, researchers made the solar panels take on hues of blue, green and purple. And, despite the coating, their efficiency only dropped from 22.6 per cent to 21.5 per cent.

These panels with photonic glass maintained their colour and performed well in durability tests too. The team behind the research say that the tech can also be easily scaled up for manufacturing.

Now they are looking for a way to achieve a brighter and wider range of colours.