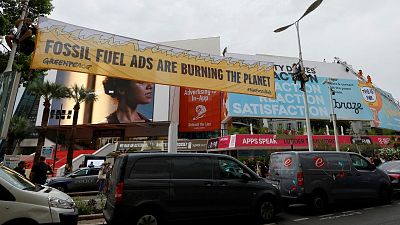 Greenpeace activists hold a banner that reads "Fossil fuel ads are burning the planet" during an action at the Festival Palace during the Cannes Lions International Festival.   -   Copyright  REUTERS/Eric Gaillard
By Rosie Frost  •  Updated: 24/08/2022

France has become the first European country to ban adverts for fossil fuels under a new climate law.

Announced on 22 August, the legislation prohibits advertising for all energy products related to fossil fuels such as petrol products, energy from the combustion of coal mining and hydrogen-containing carbons.

Adverts for natural gas are still allowed for now but new rules are set to be introduced in June next year.

Companies that go against the new law could face fines of between €20,000 and €100,000 with repeat offenders paying double the amount.

The new law comes after campaigners including Greenpeace called for the EU to ban fossil fuel adverts, comparing it to laws around those restricting the tobacco industry.

A complete ban on adverts from oil companies in France was proposed as part of a climate change convention in 2019 which involved 150 randomly selected members of the public.

But critics from the same groups initially calling for the ban have argued that the new law allows too much leeway for companies to get around it.

“You will read everywhere that advertising for fossil fuels is now prohibited, but that’s not true!” Greenpeace France tweeted after the announcement.

You will read everywhere that advertising for fossil fuels is now prohibited, but that’s not true!

They say that ads for gas can still continue as well as ads in other circumstances like sponsorship of events.

Others say it goes too far, especially given Europe’s current cost of living crisis. Supermarket bosses have argued that it prevents them from telling customers when fuel prices have dropped.

“If we have a reduction in the price of petrol, it’s a bit stupid if we can’t tell anyone,” said Édouard Leclerc, chairman of Leclerc supermarkets.

Where else have fossil fuel adverts been banned?

Though France is the first European country to ban fossil fuel adverts, a similar set of regulations was introduced in Amsterdam last year.

The Dutch capital became the first city in the world to prohibit ads from fossil fuel companies as well as those from the aviation industry.

It means that fossil-fuelled vehicles, such as petrol cars and flights, can no longer be advertised in Amsterdam subway stations or around the city centre.

The decision to remove fossil fuel advertising from the city came after a mass movement in the capital headed up by the Reclame Fossielvrij (Fossil Free Advertising) initiative.

Adverts that portray fossil fuels as normal worsen climate disruption and have no place in a city − or a country − that has complied with [the Paris Agreement].

Femke Sleegers, coordinator of Reclame Fossielvrij said it came “at a crucial moment in the fight against climate change. Adverts that portray fossil fuels as normal worsen climate disruption and have no place in a city - or a country - that has complied with [the Paris Agreement].”

The city of Sydney in Australia is now looking to follow Amsterdam’s example after its deputy mayor Jess Scully compared the effects of fossil fuels to smoking.

Scully has just successfully passed a vote to prevent coal, oil and gas from being promoted on the city's properties and at city-run events.